If the stomach does not contract and empty properly, the result can be nausea, bloating, abdominal pain, feeling full too quickly or feeling excessively full after eating. This gastroparesis is often associated with diabetes, but can also result from gastric infections or abdominal surgery. 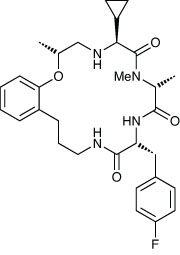 Gastroparesis, in which the stomach does not contract and empty properly, is often associated with diabetes, but can also result from gastric infections or abdominal surgery. The only current drug therapy is metoclopramide, but this can have effects in the central nervous system too.

Ulimorelin is being developed by Tranzyme Pharma, in collaboration with Norgine, as a potential treatment.1 It is a ghrelin receptor agonist; activation of this receptor is thought to be involved in creating hunger pangs, and also to promote gastric emptying, both of which should alleviate the symptoms of gastroparesis.

A randomised, placebo-controlled trial was carried out in 76 patients with gastroparesis.2 After hospital admission, subjects were given a single 30 minute infusion of the drug in doses between 20 and 600µg/kg, or placebo, daily for four days. The 80µg/kg dose was identified as most effective, and the proportion of treated patients with at least a 50% improvement in their vomiting score was significantly better than placebo. All doses were well tolerated, and safety profiles were similar to placebo.

It is also being investigated to improve GI motility in bowel surgery patients. In a placebo-controlled Phase IIb dose finding clinical trial, 236 patients undergoing open partial colectomy were adaptively randomised to receive doses of between 20 and 600µg/kg of ulimorelin, or placebo, by intravenous infusion within an hour of surgical closure, and then daily for up to seven days. The end-point was time to first bowel movement.3

The lowest efficacious dose was 80µg/kg, and a greater number of those given the drug recovered by 72 hours after surgery than in the placebo group. Median reduction of time to first bowel movement was reduced in all treated groups by 10 to 22 hours versus placebo. The most common adverse events were nausea and vomiting, which were lower in the treated group.