API sourcing: what to look for in a supplier

Jonathan Knight, Director of Market Intelligence and New Technologies at Cambrex, presents an overview of the API sourcing marketplace, summarising the factors that need to be considered when choosing an API supplier in the light of recent global market, political and economic developments

How large is the global active pharmaceutical ingredient (API) marketplace? A good way of estimating the number of competitors in the worldwide API sector, especially generics, is to look at the number of Generic Drug User Fee Amendments (GDUFAs), specifically the facility fee payments, reported by the US FDA in any year (Figure 1).

The US market acts as a bellwether for the regulated API market as a whole, including innovator activity, whereas the GDUFA information serves as a record of the total fees paid to the FDA by companies looking to supply generic APIs to the US market. 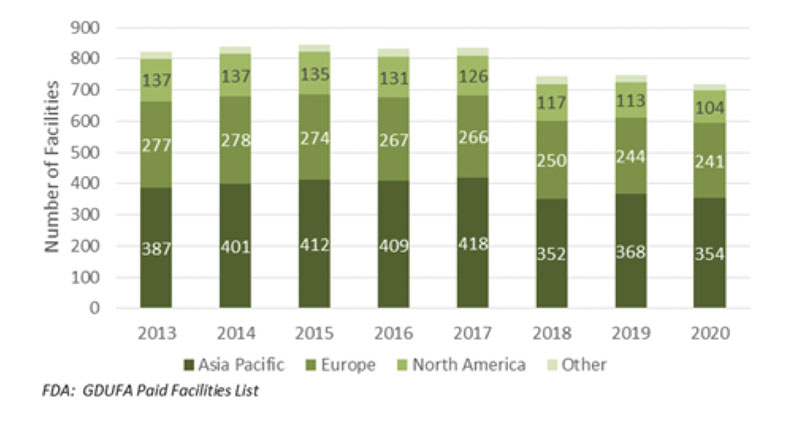 New suppliers of generic APIs need to have an active drug master file (DMF) backed by a GDUFA, which provides a means for the FDA to expedite new drug product applications in the US; alongside the annual facility fee payment, this indicates which companies are supplying the US market.

However, this does not include information about suppliers of innovator-only APIs or companies that only provide API manufacturing services under contract for clients.

For a company involved in the generic API market, it must be assumed that the infrastructure and technology required to manufacture is in place, the production route is established and set for each API, and the API is “available for reference” once the GDUFA is paid.

In most cases, the API supplier pays the fee, although there are cases when the customer for the generic product has paid the fee. The latter instance is usually when the products involve very small API volumes and the customer is paying to maintain the value of the product.

When an innovator is outsourcing its novel API, the company will need to undertake a great deal of work to identify the best potential suppliers. This may initially involve an extensive supplier questionnaire, which will consider, among other factors

Once the initial selection is made, based on the outcome of the questionnaire, a shortlist of 2–4 potential suppliers is then generated and a request for proposal (RFP) is submitted to each of these potential suppliers. The responses will then be assessed and, typically, two companies selected. A site audit will be conducted prior to the final supplier choice being made.

One of the disadvantages faced by European suppliers of new generic APIs is the need to comply with the European Supplementary Protection Certificate (SPC) requirements.

SPCs are an intellectual property right that serve as an extension to patent right regulations; they affect European generic API manufacturers that produce or sell new APIs anywhere in the world while a product is still under patent within Europe, irrespective of patent expiry elsewhere in the world.

However, recent changes in this legislation by the European Parliament will open the way for European generic API manufacturers to compete “on a level playing field” after 22 July 2022 for the majority of new generic APIs.

Most generics are available from many potential API suppliers (up to 25 in some instances), particularly from India, so where does a would-be customer start? As stated earlier, if the product is required for the US market, the supplier must have an active US DMF, which is available for reference, and be able to pay the GDUFA facility fee.

But this is just the start; if there are many potential suppliers that fit these initial criteria, how then does one differentiate?

The non-availability of certain APIs is not generally considered to be a major issue because this is usually only the case for highly specialised, very small-volume, niche products and is therefore not a common occurrence owing to the very low demand for such products.

Regulatory and other considerations

From the regulatory perspective, the most important considerations for innovators when judging a potential API supplier is its quality record, the operation and processes of its Quality Assurance (QA) department (and how they may align with the innovator’s own processes) and its regulatory history.

Regulatory compliance for generics manufacturers is essential in terms of being granted a DMF and manufacturing according to GMP guidelines.

Whether a company has received a number of FDA 483 warnings is not as important as how it may have responded to them. Although 483s are issued for serious breaches, they can also be received for less stringent infringements, which are relatively quick and easy to rectify.

As such, a company's response can indicate how it approaches all regulatory matters. One such simple but serious example would be the modification of a batch sheet with no explanation or appropriate sign-off — something that could occur for a number of innocuous reasons; officially, this could be construed as fraud and needs to be addressed. 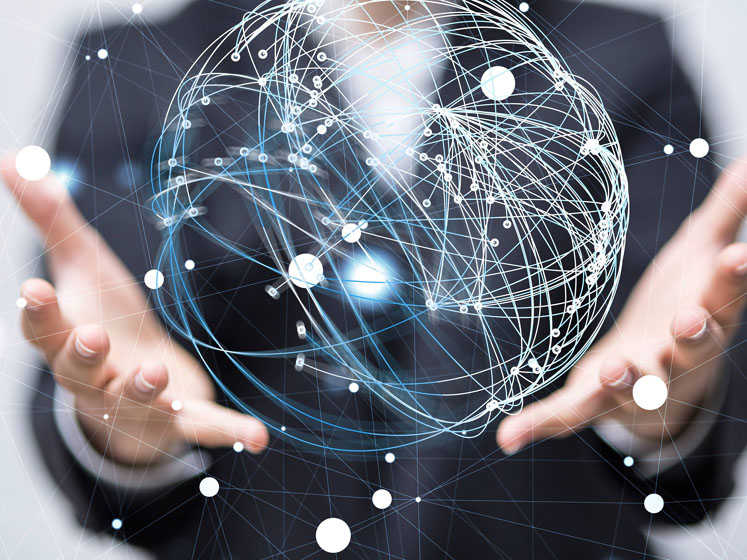 Another common example is recording an incorrect (inaccurate) temperature on the batch records of the production vessel. Although these infringements may appear to be relatively minor, customers should be wary of such incidences, as it may be indicative of a lack of thorough process oversight.

It should be noted that the FDA only gives guidance regarding best practice and will update this information on a regular basis; however, the agency does generally give warnings about when its guidance is going to change and companies need to pay attention to this. Therefore, customers need to be aware of whether potential suppliers are keeping up to date with these guidelines.

Staff training procedures are also an important consideration. For auditing, innovators may look to the quality of the supplier's training programmes for its staff, the frequency of training courses and its familiarity with current GMP and occupational safety, health, and environment (OSHSE) requirements.

It is possible — and highly recommended — that the customer does some pre-emptive work before planning site visits to suppliers, as some research into a company’s history may reveal potential concerns: a customer would not necessarily employ a supplier that had only one US DMF, for example, if it was looking to supply its product to North America.

Lost-time records are also very important indicators of the quality of the supplier (for example, whether the supplier takes them seriously enough) and, of course, the sustainability credentials of a company are a major issue these days.

Manufacturers around the world have become much more aware of this recently and, in some countries, such as China (which has been well documented), there have been many plant closures that were viewed as not sustainable from an environmental point of view.

These closures have been instigated primarily through internal, regional and state political and social pressures, such as growing populations and the recognition that whole industrial zones are no longer operating in a viable manner and need to be closed down.

Every audit and supplier choice will also focus on the cost-effectiveness and value of a supplier. However, technology requirements, on the whole, sometimes override cost considerations when choosing a supplier and the competence of handling specific processes safely and effectively.

As with the purchase of almost any product, the customer’s main priorities when sourcing an API are product availability, its quality and price. Customers need to develop a defined strategy to establish a supply chain, and this strategy may depend on the value of the product and the amount needed.

These are more important issues for suppliers of innovator APIs than generics, as the annual demand for the latter is usually visible and forecast in advance (and, as such, manufacturing campaigns are scheduled accordingly). For generic API suppliers, market shifts are more unpredictable, so holding stock for long periods is not advantageous and manufacturing tends to be done in multipurpose facilities with no fixed scheduling.

First and foremost, it is vital to choose a supplier that has the right experience, can be trusted and has a strong record with regulatory authorities such as the FDA and EMA.

Equally important is the supplier’s track record, its longevity in terms of the number of APIs it has manufactured, how long the company has been in business and the experience (in years) of its employees, particularly key people in its QA and operations teams.

One area becoming more important is the geographic location of suppliers. The need for stable, robust and reliable supply means that although there may be a premium to be paid for US and European manufacturing, there is less concern in these areas than other countries in the world that have had to address regulatory issues and political instability.

As previously noted, China has experienced a number of facility closures and is facing uncertainty in terms of trade difficulties with the US, which has reduced its influence within the global API and intermediate supply market.

Simple geography can present problems, of course, especially regarding communications across widely differing time zones; for example, there is at least a ten and a half hour time difference between the US and India.

Despite every best made plan, API supply chain issues will still occur. To shore up its industry, for instance, Indian companies have been setting up subsidiaries in China to manufacture advanced intermediates; by doing so, they hope to ensure a reliable supply of the final API to the customer from Indian-based facilities.

Depending on the drug’s dose, market size and whether it’s branded or generic, an API may comprise 1–10% (or much less) of the final drug product price. Therefore, especially in the case of small volume products, an important consideration is whether the supplier is committed to such business and actually making sufficient profit from it to be sustainable.

An equally important issue for high-volume APIs is whether a supplier manufacturing large quantities of the product is actually making enough to satisfy demand.

When sourcing APIs, the price can often be seen as the most important factor … and it will always be a balance between the buyer (who wants a good price) and the seller (who wants a good margin). However, the importance of price can vary considerably from product to product; this is particularly true when the dose is very low and the final pharmaceutical price is very high.

For innovator companies, due diligence is the most important step it can take when looking to ensure reliable supply. The alternative situation can lead to problems, excessive time and money being spent to solve them, and additional expense to find a replacement.

During the ongoing COVID-19 pandemic, pharmaceutical supply — especially for “critical medicines” — has been high on the list of government concerns, especially in terms of intermediate and raw material supplies from China and API supply from India.

This has led to both the US and European Union considering their over-reliance on imported products, both APIs and finished products, from the East. In recent communications, the US government has concluded that more than 80% of its APIs are imported, leaving its population vulnerable.

During the peak of the COVID-19 crisis, the Indian Government closed down many pharmaceutical companies within the country, as well as banning the export of 26 drugs. In response, the US government is looking to in-shore a number of critical medicines to ensure the continuation of supply going forward, including the investment of $354 million in a non-profit company, Phlow, as one of the measures.