A bullish time for biotech

Biotechnology has changed healthcare radically over the past decade and its impact on the pharmaceutical sector is growing. Susan Birks reports on the impact of the biotech boom

Despite a false start back in the 1980s, biotech today really does appear to be the dominant driver in drug discovery and manufacture. A culmination of biotech-based innovations has led to real progress in potential treatments for some of the most difficult diseases, fundamentally changing the basic approach to health and medicine.

Biotech is transforming the pharmaceutical industry, whether through the use of enzymes and ‘greener’ chemistry, or through cell culture and the design and production of biologicals and regenerative therapies. Despite the challenges, more and more companies are investing in biopharmaceutical facilities and those supplying the market with biopharmaceutical production components, analytics, quality control or formulation services are seeing growing demand for business.

Biotechnology has not only increased our knowledge of how human cells form and function, but also how enzymes, cell cultures, plants, bacteria and viruses can be used to produce active pharmaceutical ingredients in a more economic fashion.

Biotechnology is not the only science changing the market, however. The advancement of information technology is key to understanding the interrelations and reactions involved in disease and health that biotechnologists are discovering. This knowledge is being aided by in silico modelling and testing, which will become more widespread, reducing both the cost and ethical challenges of R&D. Other technologies, such as miniaturisation, computer chip technology, 3D printing and biofabrication, are also enabling biotech advances to be translated into astonishing yet practical applications that will help to take therapies forward.

Today, approximately one-third of all pharmaceutical industry R&D money is spent on biologicals and the resulting drugs will make up 52% of top 100 prescription and over-the-counter (OTC) drug sales in 2020.1 Stock prices for biotech indices are also at an all-time high, having gained more than 350% over the past five years, more than triple the rate of the broader stock market. Merger and acquisition activity is high as promising biotech companies are being bought up by Big Pharma.

For example, Pfizer is rumoured to be among those interested in buying French gene-editing company Cellectis, while a consortium of Chinese companies has agreed to acquire US biotechnology company Ambrx, of San Diego, CA. This consortium consists of entities affiliated with Shanghai Fosun Pharmaceutical Group, HOPU Investments, China Everbright’s healthcare fund and WuXi PharmaTech.

Biotech hubs have also played a pivotal role in fostering start-ups. As one example, Biocitech (a biotech hub near Paris) has reported encouraging results for 2014. Overall revenue for the hub’s residents grew by 21%, from €51.3m (US$55.5m) in 2013 to €62m ($67m) in 2014. Some companies, such as Actolis, Adebiotech, Metabolium, Pharma Biot’Expert and PrimaDiag, saw revenue boosts ranging from 50% to nearly 300%. Other residents maintained a steady level of revenue and made large investments in R&D.

Like many such hubs, Biocitech provides a nurturing environment where biotech start-ups can grow with support from a network of external partners (in this case the Chamber of Commerce and Industry, the Paris network of teaching hospitals AP-HP, and competitive clusters such as Medicen Paris Region, Cap Digital and Systematic). Biocitech residents are also optimistic in their forecasts for 2015.

Most biotechs, however, are reliant on subsidies and grants that often do not meet their real financial needs. Few have sufficient funds of their own and most rely on R&D tax credits and, more latterly, crowdfunding.

Funding from governments has grown, with the European Research Council awarding approximately €746m ($830m) for life sciences research projects across Europe. A similar trend can be observed in Asia. For instance, beginning from 2014, the Indian government planned to invest up to $5bn (€4.5bn) a year for the next five years to boost the biotechnology sector in the country and make it a $100bn (€90bn) industry by 2025.3 This increases the purchasing power of major research institutes, and in turn is driving the market for biologics safety testing products.

One of the high growth biotech markets is that for antibodies.2 The global antibody production market for the period of 2014–2019 is expected to reach nearly $2.6bn by 2019 up from $1.425bn in 2014, a CAGR of 12.5%. Many of the players in this market either built new or recently expanded existing facilities. SAFC’s custom manufacturing division, for example, has just completed the expansion of its St Louis facility to support commercial-scale antibody drug conjugate (ADC) manufacturing. 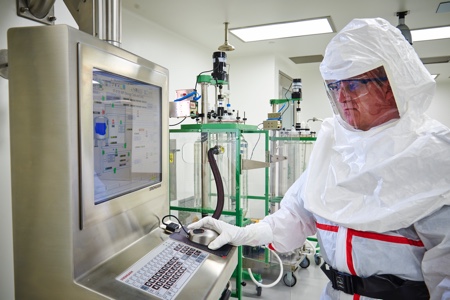 The development of new ADCs also continues apace. Immune Pharmaceuticals, for example, has just formed a partnership to accelerate the development of NanomAbs, a promising new platform technology that may allow targeted delivery of chemotherapeutic agents decreasing the risk of systemic exposure to these products. The technology has been licensed by Immune from Yissum, a Technology Transfer company from the Hebrew University of Jerusalem.

In Japan, Nikon has formed a collaboration with Lonza for cell and gene therapy manufacturing. Lonza, a leading developer and producer of cells for regenerative medicine therapeutics will provide Nikon with access to its quality and operating systems, facility design and consulting services for the establishment of a wholly-owned Nikon cell and gene therapy contract manufacturing business.

Nikon will benefit from Lonza’s cell manufacturing expertise, while expanding its entry into the contract manufacturing market. ‘This collaboration will contribute greatly to the growth of the global cell and gene therapy market,’ says Andreas Weiler, Head of Emerging Technologies, Lonza Pharma & Biotech. ‘We are utilising our expertise built over the last decade to work together with Nikon in bringing high-quality, innovative development and manufacturing to Japan. Because of its work in iPSC technology, we believe Nikon is an ideal partner for this collaboration in regenerative medicine.

Lonza says Japan has become an attractive location for the future of regenerative medicine since the induction of the Revised Pharmaceutical Affairs Act, which became effective in November 2014. The Act states conditional product approval may be granted in Japan when clinical safety and an indication of efficacy of a regenerative medicine product are demonstrated.

The use of somatic stem cells (haematopoietic stem cells and mesenchymal stem cells) is reportedly gaining traction in the US and European markets, with the use of induced pluripotent stem cells (iPSCs) following quickly behind. In addition, virally modified gene therapy has demonstrated promising clinical results in multiple disease indications, including cancer. Using viral vectors, immune and stem cells can be genetically modified and reintroduced to the patient as a targeted therapy.

In spite of all the headlines heralding groundbreaking cures, these novel drugs bring with them many challenges as well as opportunities. In oncology, for example, in some cases their effects can be short term; they are also incredibly expensive to make. And while some manufacturing costs will decrease in the future, the scale-up of production from labscale, and the quality controls required for biologics are more complex and time consuming than for traditional chemically synthesised small molecule drugs and this contributes to the higher costs.

In spite of all the headlines heralding groundbreaking cures, these novel drugs bring with them many challenges as well as opportunities

As the technology moves on, many of the current challenges will be overcome, but there will always be new advances creating demand for a new round of biotech funding.