A healthy outlook for targeted medicines

The US leads in the market for biomarkers and theranostics with oncology being the focus, but other disease areas are following rapidly and the personalised medicine market is set to grow at a rapid pace over the next five years

It began with huge advancements in the field of genomics, which in turn created the opportunity for tailoring treatments to individuals, or subsets of the population, such that today we are seeing the first personalised medicines emerging on the healthcare market. Research into the identification of molecular markers towards disease predisposition and progression has led to a burgeoning manufacturing sector producing biomarkers and general diagnostics. The pharmaceutical market quickly realised the benefit of such biomarkers in producing ‘companion diagnostics’, which are developed alongside the therapeutic to enable better decision-making about the development and use of a potential drug therapy.

According to the report Personalized Medicine Market Analysis by RNCOS, published in May, the US is the lead market for personalised medicine and is forecast to grow at a compound annual growth rate (CAGR) of around 9.5% during 2012-2017. Such figures become meaningful only when broken down into more specific sectors, but with such rapidly developing sectors – and terminology – this can be quite complex and market reports tend to focus on different but often overlapping aspects of biomarkers and companion diagnostics.

According to Companiesandmarkets.com, the global biomarkers market reached US$13bn in 2011. The majority of revenue was generated through the application of biomarkers in the discovery, testing and prescription of oncology therapeutics, with other leading therapeutics areas being central nervous system (CNS) and cardiovascular system (CVS) disorders.

Biomarkers not only hold the potential to predict disease susceptibility but are used to detect and monitor disease progression, and also act as a guiding force in drug development and evaluation. Thus it is necessary to distinguish between: disease-related biomarkers that give an indication of whether there is a threat of disease (risk indicator or predictive biomarkers) or where a disease already exists (diagnostic biomarker) or how such a disease may develop in an individual case (prognostic biomarker); and drug-related (pharmacogenomic) biomarkers that indicate whether a drug will be effective in a specific patient and how that patient’s body will process it.

In 2011, more than 40% of the new molecular entities (NMEs) approved by the FDA had a pharmacogenomic biomarker. Both large and small companies are now actively developing drug-diagnostic combination products (companion diagnostics or theranostics). The success of Herceptin and Glivec – which have reached blockbuster status even after targeting a limited audience – has shown that the benefits of using companion diagnostics can outweigh the challenge of having a limited target population. Leading diagnostic developers include Genomic Health, Myriad Genetics and Roche. The latter says on its website: ‘Most of our targeted therapeutic agents are combined with a companion diagnostic test that predicts the probability of a patient responding to treatment. This personalised approach to cancer treatment is not only better for the patients but also enables an efficient use of financial and human resources of national health systems.’

Other key players are implementing various growth strategies in the market to gain competitive edge. Research indicates that agreements, partnerships, collaborations and joint ventures are key to growth in this market. 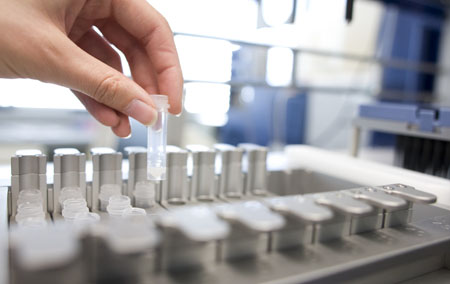 Once again cancer is the biggest area in terms of market value, with 95.9% of the companion drugs market sales contributed by drugs indicated for cancer. Current diagnostics technologies focus on detection and diagnosis of cancer using mainly blood, faeces, urine tests or genetic tests. The search has been complicated because genomic studies have revealed that many cancers, such as breast cancer, are actually groups of several diseases with different genetic signatures.

Targeted treatment with the help of companion diagnostics, which help track disease progress, will increase the range of potential therapeutic approaches available to treat cancer and enable patients to be treated with the most appropriate drugs.

McKinsey & Company said in its report Personalised Medicine, the path forward, published in March this year, that the majority of experts believe that although the number of new drugs with associated diagnostics will follow linear growth patterns, the use of advanced diagnostics for therapy selection will see exponential growth.

Despite falling prices, the massive increase in test volumes will keep the market on an upward trajectory

The growing prevalence of cancer, together with greater patient awareness, is expected to drive test volumes. Despite falling prices, the massive increase in test volumes will keep the market on an upward trajectory. ‘The projected launch of new NAT products for cancer diagnosis will result in high growth rates and revenue generation in this segment,’ noted Frost & Sullivan Senior Research Analyst Divyaa Ravishankar. ‘NAT products have the ability to determine the predisposition of the disease condition. They address the need for diagnostic tests that aid in the early detection and prevention of cancer.’

While these are positive signs, consolidation has increased the bargaining power of labs, allowing them to squeeze the prices of cancer-related tests. The demand is now for high-capacity, high-volume laboratory solutions, rather than high-value, labour-intensive tests such as NAT.

Finding ways to diagnose cancer earlier could greatly improve the chances of survival for many patients but the path is by no means straightforward. In Roche’s 2012 annual report, Susanne Arbogast, pathologist for Roche’s Oncology franchise, said: ‘Cancer diagnostics appear set to evolve from the single test approach to the simultaneous testing of several parameters to identify the best possible treatment for a particular patient.’

Looking for the specific proteins secreted by cancer cells in the bloodstream can prove very difficult because the quantity of these biomarkers is so low. A study completed in 2012 by Stanford University researchers found that even using the best existing biomarkers for ovarian cancer, and the best technology to detect them, an ovarian tumour would not be found until eight to 10 years after it formed.

But the technology is moving fast and MIT researchers say they have developed a biomarker amplification system that could also be used to monitor disease progression and track how tumours respond to treatment.