Probiodrug’s novel approach to Alzheimer’s targets a modified form of ß-amyloid, which has a key role in the formation of toxic Aß oligomers. The company’s lead product is a first-in-class oral small molecule glutaminyl cyclase inhibitor 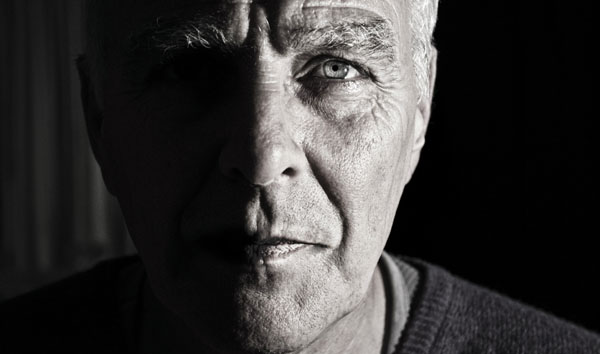 Alzheimer’s disease (AD), the leading cause of dementia, is a devastating progressive neurodegenerative disease. AD symptoms vary among individuals and are characterised by a progressive loss of memory accompanied by emotional changes, hallucinations, delusions and impaired social behaviour, leading to an increased need for around-the-clock care in the final stages of the disease.

Worldwide, nearly 44 million people have AD or a related dementia and it is estimated to affect 131.5 million individuals by 2050.1 AD statistics are alarming: the rate of sufferers doubles every 5 years after the age of 65, reaching 30–50% in those 85 and older. Dementia will cost the global societal economy $818 billion, one reason why the G8 and US Congress have made finding treatment for AD by 2025 a top priority.

They neither halt the progression nor provide sustainable improvement of the disease state. No new AD drugs have been approved for nearly a decade, underlining the fact that there is a very high unmet medical need for disease-modifying (safe and efficacious) therapies.

An N-terminally truncated and pyroglutamate-modified Aß variant, pGlu-Aß, has gained attention owing to its high presence in plaques and exceptionally high amyloidogeneity and neurotoxicity. It has been shown that pGlu-Aß is detectable in biopsies of preclinical AD patients and increases with disease stage.2

The first generation of disease-modifying AD drugs was based on the original Abeta hypothesis established in the early 1990s, which noted the Abeta plaque as an important causal factor of the neurodegenerative process. Consequently, the approaches addressed Aß in general (inhibition of Aß production or increased clearance of existing plaque burden). Outcomes from the first late-stage clinical trials have been disappointing so far; the lessons learned, however, have been included in the design of new trials.

AD symptoms vary among individuals and are characterised by a progressive loss of memory accompanied by emotional changes, hallucinations, delusions and impaired social behaviour

Several product candidates are currently in advanced clinical studies, such as BACE inhibitors and mAbs binding to Aß monomers or Aß aggregates. Results will be ready within the next few years. In 2016, clinical scientists reported promising results from a Phase Ib trial studying Aducanumab (Biogen Inc. and Neuroimmune Holding AG), a mAb that binds Aß aggregates in patients with prodromal or mild AD patients, connecting the reduction of brain plaque burden measured by Abeta-PET imaging with a reduction in cognitive decline.3

These data strongly further the concept of Aß being decisively involved in AD pathology. The original Aß hypothesis has been modified in recent years, and it is now widely accepted that soluble, highly toxic small Aß aggregates called Aß oligomers, rather than Aß plaques, are the key culprit driving early pathological changes in AD. Probiodrug has developed a new therapeutic concept closely linked to the Abeta oligomer hypothesis, based on experimental results obtained by its own research and in collaboration with various academic groups.

The scientists corroborated earlier findings that Aß plaques contain high levels of a post-translationally modified Aß species known as pyroglutamate-modified Aß (pGlu-Aß), and they recently discovered that pGlu-Aß seeds Aß oligomers. Moreover, they demonstrated the hyper-neurotoxicity of pGlu-Aß-related oligomers, which seems to be brought about by changes in the secondary and tertiary Aß structure conferred by pGlu-Aß.4

Probiodrug further elucidated the formation of this toxic variant, discovering and characterising an enzyme called glutaminyl cyclase (QC), which is essential for the formation of pGlu-Aß. It cyclises the glutamate moiety of N-terminally truncated Aß species that carry glutamate at positions 3 and 11. These findings comprise key cornerstones of the novel therapeutic AD concept of inhibiting QC activity.5

The production of the substrate for QC, N3 Aß- or N11-Aß peptides, is not fully understood. The well-known ß- and gamma-secretases, involved in cleaving the amyloid precursor protein (APP), preferentially generate full-length Aß peptides starting at Asp-1 (Abeta 1-x). Thus, to get N-terminal glutamate as a substrate for QC, an additional modifying step is needed — the N-terminal proteolysis of the first two or first 10 Aß amino acids. Several enzymes have been identified as candidates, such as meprins, IDE and cathepsins.

Probiodrug has shown that QC inhibitors reduce pGlu-Aß and attenuate behavioural deficits in various transgenic AD-like animal models; both genetic and pharmacological ‘proof of principle’ studies have been published. A comprehensive drug discovery programme resulted in the selection of PQ912, a small molecule QC-inhibitor as Probiodrug’s lead product candidate for development.

The compound revealed a very good drug-like profile and has not shown any drug liabilities to date. Together with the good safety and tolerability in Phase I at high drug exposure, one can conclude a comfortable safety margin. PQ912 was safe and well tolerated in a comprehensive single and multiple ascending dose Phase I study in healthy young and elderly volunteers.

The maximum tolerated dose was not reached. QC activity in the cerebrospinal fluid (CSF) was inhibited in a dose-dependent manner. Analysis of pharmacokinetic-pharmacodynamic correlations showed that with safe doses, an average of 90% QC inhibition in the CSF was achieved.6

PQ912 is currently being evaluated in a Phase IIa study in biomarker-identified early AD patients (prodromal and mild AD). Primary readout is safety and tolerability, while several exploratory readouts are included to capture early pharmacodynamic and efficacy signals.

These comprise a neuropsychological test battery (NTB), measurements of neuronal connectivity by means of EEG and resting state functional MRI (rsfMRI), and a set of new molecular biomarker such as pGlu-Aß, Abeta oligomers and synaptic markers.

Probiodrug is also pursuing a passive immunotherapeutic approach to selectively clear the brain of existing pGlu-Aß and leave non-toxic forms of Aß untouched. PBD-C06 is a monoclonal antibody with high specificity for pGlu-Aß, currently in CMC development.

In animal AD models, PBD-C06 reduced both soluble and insoluble pGlu-Aß, as well as total Aß, and also rescued behavioural deficits.7 The mouse variant of PBD-C06 has been successfully humanised and deimmunised to avoid detection by the patient’s immune system.

In July 2016 at the AAIC conference in Toronto, Canada, scientists from Eli Lilly and Company presented results of a Phase Ia study in AD patients with their pGlu-Aß-specific antibody LY3002813. They showed for the first time that specifically targeting pGlu-Aß markedly reduced the Abeta plaque in AD patients as measured by Abeta PET imaging with 18-Florbetapir.

As the two modes of action for targeting pGlu-Aß could conceptually be complementary, Probiodrug has explored combinations of PQ912 and PBD-C06 in animal models. First data show that the combination has an additive effect on both pGlu-Aß as well as total Abeta.

Moreover, there is also a rationale for combining anti-pGlu-Aß strategies with ß-secretase inhibition. Indeed, a synergistic effect has been shown in combo experiments in animals done by Eli Lilly and Company using their BACE-Inhibitor LY2811376 and the mouse variant of their pGlu specific antibody mE8. The anti-pGlu-Aß approach may also have potential in other indications, such as Down’s syndrome and Huntington’s disease, which Probiodrug is evaluating preclinically. 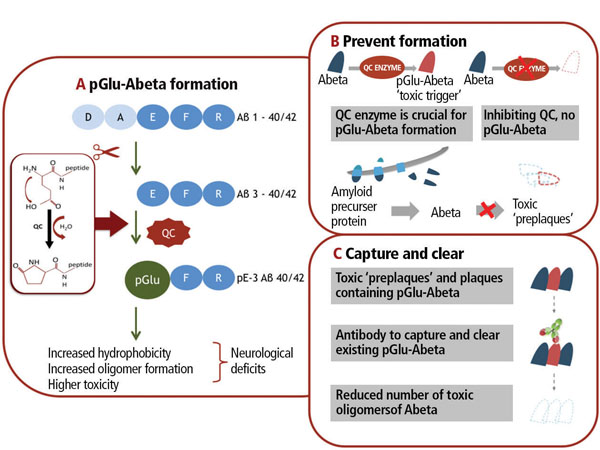 Formation process of 3N-pGlu Abeta: The generation of full-length Abeta (Abeta 1-40/42) is followed by the truncation of the first two amino acids aspartate (D) and alanine (A). Glutamate is now accessible to Glutaminyl Cyclase (QC) and, with the liberation of water, the enzyme cyclises the glutamate side chain to pyro-Glutamate (pGlu), thereby changing the physicochemical properties of the Abeta molecule and triggering the pathophysiological changes described (Figure 1A).

Prevent formation: The QC enzyme modifies Abeta to pGlu-Abeta as described above, an enzyme inhibitor (such as PQ912) efficiently blocks this reaction and thereby prevents the cascade of toxic preplaque formation (Figure 1B).