Antiemetics are an important part of chemotherapy regimens, as nausea and vomiting can prove dose-limiting

Many anticancer drugs cause nausea and vomiting that can prove dose limiting, so antiemetics are an important part of chemotherapy regimen. The 5HT3 antagonists such as ondansetron and palonosetron have made a real difference to the quality of life of cancer patients, and another mechanism of action, blocking the neurokinin-1 receptor, is also being targeted. Merck’s aprepitant is already available, and others are under development, including Helsinn’s netupitant, which is being developed in conjunction with Eisai.

NK-1 is an attractive target to prevent emesis as the G-protein coupled receptor is highly expressed in the vomiting centre of the brain, and its activation sets off the vomiting reflex. In combination with 5HT3 antagonists, drugs that block NK-1 could have real value in preventing nausea and vomiting in cancer patients, with the NK-1 antagonists reducing delayed emesis alongside the 5HT3 antagonist’s acute effects.

Netupitant is being evaluated in combination with palonosetron, and several trials have been carried out. In one randomised, double blind, parallel group Phase II trial, designed to determine the optimum dose of netupitant, 694 chemo-therapy naïve patients being treated with cisplatin-based chemotherapy for solid tumours, were given 0.5mg palonosetron orally either alone or alongside 100, 200 or 300mg oral doses of netupitant on the first day; an exploratory arm using a standard three-day aprepitant plus intravenous ondansetron regimen was also run.1 All were also given oral doses of dexamethasone on days 1–4.

All those dosed with netupitant showed superior overall complete response rates with neither emesis nor rescue medication over the five days of the trial – each dose level gave a complete response rate in the high 80s compared with 76% for palonosetron alone. The highest dose was significantly more effective than palonosetron alone, and numerically superior to aprepitant plus ondansetron, for all secondary endpoints such as significant nausea throughout. The combination was well tolerated, and the 300mg dose selected for Phase III trials. 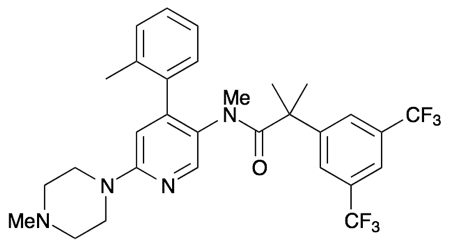 Two Phase III trials have been reported. In one randomised, double blind, parallel group Phase III trial, 1455 chemotherapy naïve patients on anthracycline-cyclophosphamide chemotherapy were given a single dose of the netupitant-palonosetron combination, or palonosetron alone, on the first day of the chemotherapy cycle.2 Again, dexamethasone was also administered. The complete response rate in the delayed phase was significantly higher in those given netupitant, and the combination was also better than palonosetron in preventing nausea once more. It was well tolerated, and safety profiles were similar for both groups.

In another double blind, randomised study, 413 chemotherapy naïve patients were given 300mg netupitant plus 0.5mg palonosetron on the first day of each chemotherapy cycle, along with oral dexamethasone, or oral aprepitant along with the palonosetron and dexamethasone.3 Three-quarters of the subjects completed at least four cycles, with adverse event profiles being similar across both groups. Overall complete response rates in the first cycle were 81% with netupitant, and 76% with aprepitant. This efficacy was maintained over subsequent cycles.