Cytomegalovirus (CMV) can cause severe difficulties in patients with compromised immune systems, such as people with HIV infection or those who are undergoing organ or bone marrow transplantation

Cytomegalovirus (CMV) rarely causes huge problems in otherwise healthy patients. However, in those with compromised immune systems, such as people with HIV infection or those who are undergoing organ or bone marrow transplantation, it can cause severe difficulties. These range from fever to post-transplant lymphoproliferative disorder, if the patient is also infected with Epstein Barr virus. Treatment is typically with nucleoside antiviral drugs, notably ganciclovir and its oral prodrug valganciclovir, and this is normally given prophylactically to those undergoing transplants. However, resistance commonly develops, and alternative therapies are thus required that act at a target other than the viral DNA polymerase pUL54 at which ganciclovir is active.

One such drug, letermovir, was invented by German company AiCuris, and is being developed and commercialised by Merck & Co.1 It interferes with the viral pUL56 gene product, which leads to disruption of the viral terminase complex.2 This complex is unique to viruses, and therefore much less likely to cause off-target toxic effects in humans.

The first successful treatment of multidrug resistant CMV disease took place in a patient who had received a lung transplant, and developed refractory, multidrug resistant CMV disease that affected the lungs, retina and gastrointestinal tract, and did not respond to drug therapy or reduction in immunosuppressant drug doses.3 Letermovir was given as an emergency treatment and, along with a further reduction in immunosuppression, gave a rapid clinical, virological and radiological cure that persisted. 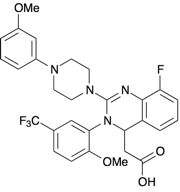 Clinical trials have also been carried out. In one Phase IIa study, 27 transplant patients who had active CMV replication were given a 14-day oral course of 40mg letermovir twice a day, 80mg once a day, or local standard of care.4 All groups had a statistically significant decrease in their CMV-DNA copy number from baseline, with no statistically significant difference between the groups. However, viral clearance was achieved for half of the patients given letermovir compared with about a quarter of the standard of care group. Letermovir was generally well tolerated, and none of the patients developed CMV disease during the trial.

Another Phase II trial was carried out, this time in patients receiving haematopoietic cell transplants. A total of 131 patients receiving bone marrow transplants who had CMV infection were assigned to three sequential study cohorts in a double blind trial design.5 Subjects were given oral prophylactic doses of 60, 120 or 240mg of letermovir or placebo once a day for 12 weeks after the transplant, with weekly assessment of their CMV infection. The prophylaxis failure rate was dose-dependent, at 64% for those given placebo, 48% for the 60mg group, 32% at 120mg and 29% in the patients given the highest dose. The safety profile at all doses was similar to placebo, and there were no signs of either nephrotoxicity or haematologic toxicity.

Plans for Phase III trials are now under way. The drug has been granted orphan product status by both FDA and EMA for the prevention of CMV viraemia and disease in populations at risk, and has also been given fast track status in the US.