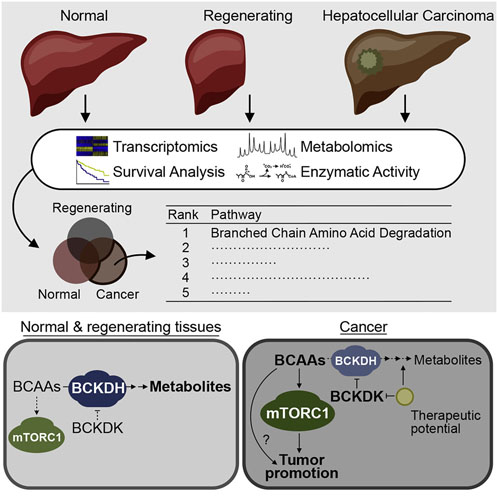 Researchers at A*STAR's Singapore Bioimaging Consortium (SBIC) have discovered that branched-chain amino acids (BCAAs) in tumours can be targeted to prevent and treat cancer.

Together with collaborators from the United States and National Cancer Centre Singapore (NCCS), they found that some cancers potently suppress the catabolism (breakdown) of BCAAs.

The researchers designed a project to circumvent this problem by studying not only Hepatocellular Carcinoma (HCC), the predominant form of liver cancer, but also healthy regenerating liver tissues.

SBIC's findings are a result of 6 years of comprehensive preclinical and clinical research in collaboration with Duke University, the NCCS, and the University of Rhode Island. The research study tapped on SBIC's multidisciplinary capabilities and involved transcriptomic and metabolomic analyses of human tumours, cancer cell lines, and animal models of liver cancer and regeneration.

The research team led by Dr Han Weiping, Deputy Director of SBIC and Head of the Laboratory of Metabolic Medicine (LMM), and Dr Russell Ericksen, Research Scientist in LMM, first studied gene expression levels in matching tumour and non-tumour liver samples from HCC patients at NCCS, and validated their findings with data gathered from multiple independent HCC cohorts, such as The Cancer Genome Atlas (TCGA).

The team found that the catabolism of BCAAs was not only suppressed in tumours when compared with adjacent normal tissue, but the degree of suppression correlated with tumour aggressiveness and disease progression.

They also identified three BCAA catabolic enzymes — BCKDHA, ACADS and ACADSB — that were the best predictors of patient survival (Figure 1). 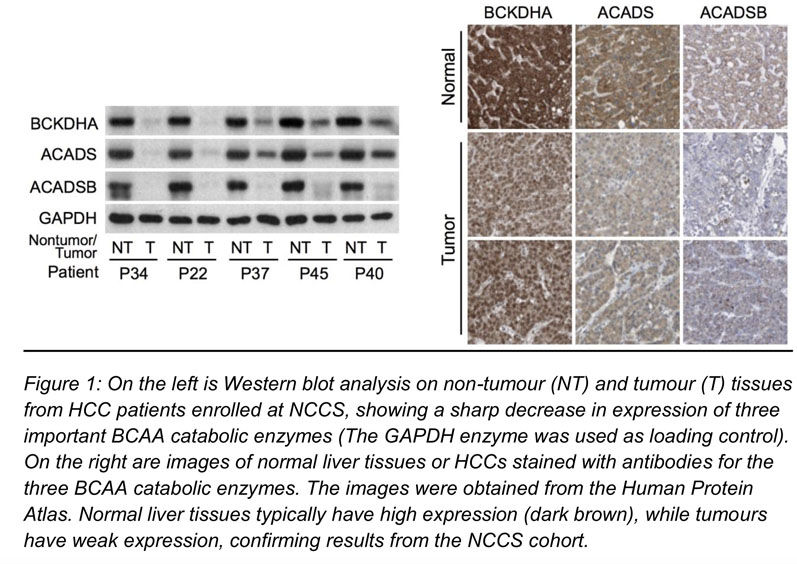 The changes in BCAA metabolism were confirmed by analysing metabolite and protein levels, as well as enzyme activity in the matching tumour and non-tumour liver samples.

Using a new hyperpolarised magnetic resonance spectroscopy method developed by the SBIC researchers, enzyme activity in the livers of live subjects was monitored in real-time. This non-invasive technique could eventually be used in the clinical setting to screen patients for changes in BCAA catabolism.

By comprehensively analysing additional cancer subtypes profiled by TCGA, the investigators also found that reduced expression of BCAA catabolic enzymes correlated with tumour development, progression and aggressiveness, as well as patient survival in numerous other cancers.

These associations were strongest in cancers of the colon and rectum, stomach, kidney and adrenal cortex. Regardless of cancer subtype, when the TCGA patients were analysed collectively as a pan-cancer cohort, those with higher tumour expression of BCKDHA, ACADS, and ACADSB lived significantly longer.

Given that BCAAs are essential amino acids — meaning they are absorbed from food rather than produced naturally in the body — the researchers also explored how dietary BCAA intake influenced tumour development and growth.

In one study, the researchers used a common mouse model of liver cancer, and fed the mice diets with either normal or high levels of BCAAs. After 5–8 months, the group of mice fed with high BCAA diets had a potent increase in tumour number and size.

Of note, the same diet did not cause any changes in control mice that do not normally develop tumours, suggesting the effects were specific to cancer.

Figure 2: The two charts show the liver masses of mice at five month (left) and eight month (right) time points (normalised to the body weights of the mice). At both time points, mice which were introduced to diethylnitrosaine (DEN) - a compound which generates tumours from within an organism, and fed diets with high levels of BCAAs, had a greater tumour burden, as reflected by increased liver masses. This effect was consistent in diets containing either low or high levels of fat (LFD and HFD, respectively). Notably, the high BCAA diets did not substantially impact the healthy livers of uninjected mice.

Finally, the researchers analysed the National Health and Nutrition Examination Survey (NHANES) III cohort, which has detailed nutritional and medical information. In agreement with animal studies, this analysis suggested that high dietary intake of BCAA is also associated with a high overall cancer mortality risk in humans (Figure 3). 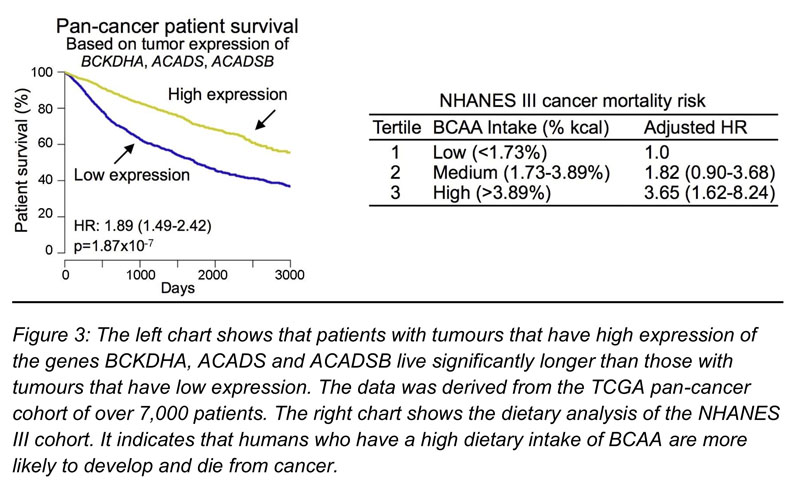 Dr Han Weiping said: "The current study presents opportunities for the development of prevention and therapeutic intervention strategies to treat several common and deadly cancers. We hope to see that our study eventually leads to new drugs and therapies that benefit patients."

"This important study by Dr Han Weiping's team is key in better understanding the role of the interesting cancer-driving metabolites, BCAAs - not only for liver cancer, but also potentially in other cancers. The finding that dietary BCAAs regulate cellular metabolism uncovers new factors in the cause of liver cancer, and potentially new drug targets," said Associate Professor Toh Han Chong, Senior Consultant Medical Oncologist and Deputy Medical Director (Education), NCCS.

Moving forward, the team will work with NCCS to continue investigating the underlying mechanisms by which BCAAs regulate HCC, and to develop and test the efficacy of drug compounds that may lead to better treatment and outcomes for patients.