During the past three decades, biological therapeutics have played an increasingly important role in the fight against cancers, autoimmune disorders and diseases that small molecule drugs have been ineffective in alleviating 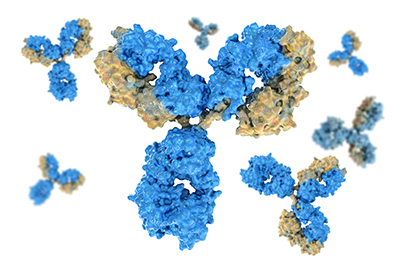 
Despite the diversity of biological pharmaceuticals, protein-based therapeutics account for the vast majority of biologics — either approved or under development. Of the protein-based biopharmaceuticals, recombinant proteins are the largest group, which consists of enzymes, hormones, blood factors, monoclonal antibodies (mAbs) and antibody related products (Fc-fusion proteins and antibody fragments).

To date, there are around 650 approved protein therapeutics worldwide, including more than 400 recombinant products.1 Additionally, the development pipeline for protein-based biologics is fairly strong; 1300 candidates are under development, 33% of which are at various phases of clinical trials. With respect to mAbs, more than 30 therapeutic mAbs have been approved and more than 350 of them have entered clinical trials.2

Recombinant proteins can be produced from many expression systems, including microbial (E. coli), insect, yeast, mammalian cells or transgenic cell systems. However, mammalian cell lines have been the most commonly used production systems for recombinant proteins, partially because of the similarity of their metabolic and protein processing pathways to those in human cells.1

Despite the variety of available mammalian cell lines, the CHO cell line has been the preferred choice for recombinant protein production since the approval of the first CHO-derived recombinant protein (tissue plasminogen activator, tPA) in 1986. Today, about 70% of protein therapeutics are made in CHO cells.4

Half of the top 10 best-selling biologicals of 2015 are produced from engineered CHO cells, including Humira, Rituxan, Avastin, Herceptin and Enbrel (Table I).5 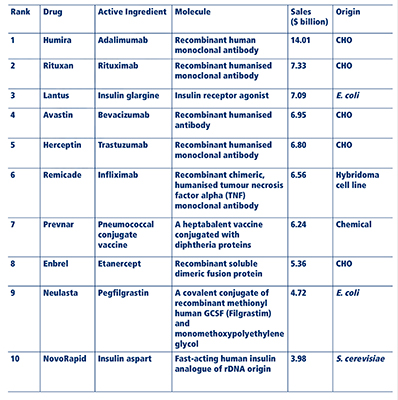 
Several characteristics of CHO cells contribute to its dominance as the host for recombinant proteins. First, CHO cells exhibit remarkable adaptability to grow in suspension, serum-free or chemically defined media at high densities, an important feature for large-scale manufacturing. Second, few human viruses can propagate in CHO cells, making them less risky for viral infection. Third, post-translational modification of recombinant proteins in CHO cells is compatible to that in humans.6 Fourth, with the publication of the CHO genome and advanced genome engineering tools, the ability to modify the CHO genome for improved recombinant protein expression has been greatly enhanced. Fifth, the CHO-based production process has matured considerably, enabling high yield production. For example, a CHO-derived mAb can typically reach a titre of 1 g/L in batch and 1–10 g/L in fed-batch processes.4 Lastly, regulatory agencies are familiar with CHO expression systems with an established regulatory history and safety profile.3

Cell line development starts with expression vector engineering and transfection, followed by single cell selection, cloning, screening and evaluation. During the selection and cloning process, multiple rounds of cell amplification and selection are routinely done in the presence of an increased concentration of selection drugs. A suitable production cell line usually takes 6–12 months to develop, which is time, labour and capital intensive.6

A typical transfection vector contains the gene of interest (GOI) and a selection marker (downstream from a promoter). The GOI and selection marker genes are linked with an internal ribosome entry site (IRES). This ensures that both the genes are dependent on the same promoter for transcription into one mRNA.6

Cell clones are selected by applying enzyme inhibitors (selection drugs) that force the cell to express the selection marker. These inhibitors are methotrexate (MTX) for DHFR and methionine sulphoximine (MSX) for GS.6 In general, selection pressure can be increased by increasing the concentration of the selection drugs. However, this approach is limited by slow cell growth at high drug concentrations. One prominent benefit of GS selection is shortened development timelines (no gene amplification is required). In the DHFR system, an amplification cycle requires 12 weeks to complete and up to five cycles or more.7 Recently, much of the patent protection for the GS selection system has expired; consequently, this system is likely to become the preferred selection tool for novel biologics development.

To accelerate recombinant protein development, it is critical to generate stable high-expressing cell lines in an efficient and timely manner. One tactic to increase the likelihood of selecting cell clones with high GOI productivity is by selection marker attenuation. In selection marker attenuation, the activity or expression of the selection marker is purposely reduced via the genetic modification of expression vectors to achieve high selection stringency — even at low drug concentrations. Cells with low productivity can be easily picked out while surviving cells are more likely to be more productive in expressing the select marker gene as well as the GOI.6

Another strategy to achieve high producing cell clones is to increase gene transcription by introducing elements into the expression vector that create a transcriptionally active region at the random integration site on the host chromosome. Such elements include the matrix attachment regions (MARs) and ubiquitous chromatin opening elements (UCOE).6 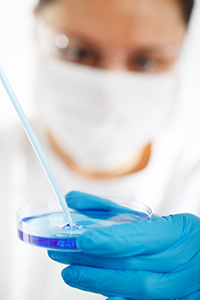 Site-specific recombination is a relatively new approach to high expressing cell line development. The main concept is to integrate the GOI into a transcriptionally active region, or a genomic hot spot, of the chromatin. Cre/Loxp and Flp/FRT are two common systems used for site-specific recombination, both of which rely on random integration of a reporter gene to identify genomic hot spots.3 Artificial chromosome expression (ACE) offers another means to achieve targeted recombination by enabling GOI expression without integration into the host cell genome.6

Site-specific recombination allows stable cell clones with high productivity to be generated in a more controllable and predictable manner — and is likely to significantly reduce the time required for cell line screening.3 However, the complexity of these systems and the concomitant need for expertise as well as the cost may hamper their adoption.

The original cell pool obtained after transfection is highly heterogeneous — owing to random integration of the GOI into host genomes followed by gene amplification. High producing clones are rare in the transfected cells as the probability of a GOI integrating into a genomic hot spot is quite low; only about 0.1% of the genomic DNA is transcriptionally active.6

To identify the stable high-producing cell clone, a large number of cell clones must be screened. The single stable high-expressing cell clone can be isolated through serial limiting dilution or single-cell sorting and arraying (fluorescence-activated cell sorting, FACS) or colony picking from dilute seeds into semi-solid media (ClonePix FL technology).6,8 Certain steps in the screening process are usually automated to improve efficiency and accuracy.

Ensuring monoclonality is a major regulatory concern during recombinant cell line development. As stated in ICH guideline Q5D: “For recombinant products, the cell substrate is the transfected cell containing the desired sequences, which has been cloned from a single cell progenitor.”9 To meet the regulatory monoclonality standard, the cloning procedure should be documented with the details of imaging techniques and/or appropriate statistics.10

Overall, cell line development is an integral part of the process development for recombinant proteins. It is essential to understand the relationship between process parameters, culture performance and product quality as early as possible. Selection of the right production clone is critical for both clinical and commercial-scale production. The final production clone decision should be made prior to entering Phase III trials, and preferably at Phase I, so that regulatory requirements for comparability data and possible additional clinical trials — owing to major processing changes caused by a cell line change — can be avoided.11