Cost-effectively preventing the contamination of pharmaceutical powders with magnets

As machinery begins to age, metal particle contamination becomes an issue. Not only is this expensive for pharmaceutical companies, it can cause delays, compromise the quality of drug batches and, ultimately, result in problems for patients. However, a simple solution lies in magnetic filtering, as Alessandro Viola from process engineering company, BPE, explains 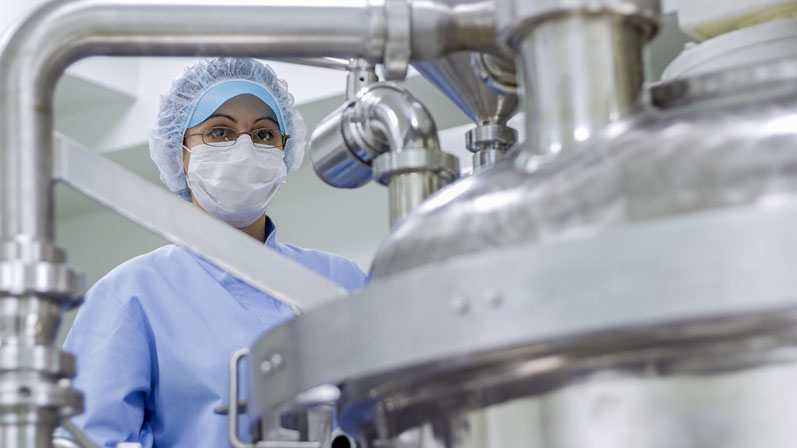 Many drugs and medicines start life as powders that become dense in bulk quantities, making it difficult to see with the naked eye if they have become contaminated with loose parts or small particles that emanate from machinery during manufacturing.

Traditionally, it wasn’t until the final checking stages that metal particle contamination would become apparent, leading to hundreds of thousands of drug batches — and money — being wasted. However, thanks to a development in magnetics, that problem could soon become a thing of the past.

You might think that only ferrous metals can be attracted by magnets; however, since the development of neodymium iron boron magnets in the 1980s, the door has opened for pharmaceutical companies to make simple changes to their processes that are also cost effective.

Magnetic separation involves the physical isolation of discrete particles with different susceptibilities to a magnetic field, such as minute pieces of (paramagnetic or ferromagnetic) metal in a (non-magnetic) bulk powder. 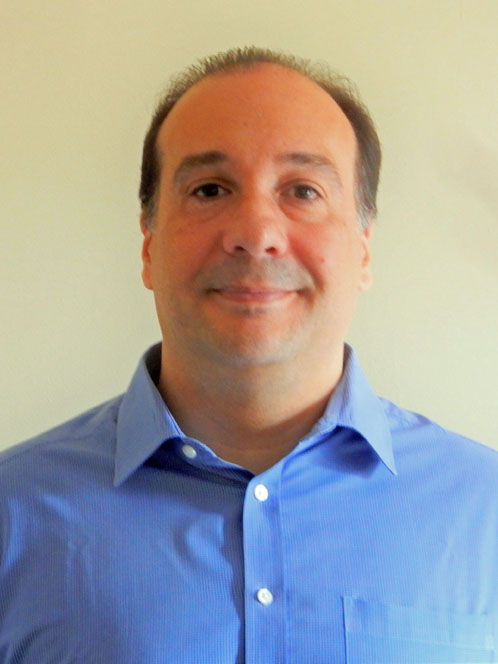 This kind of contamination can be difficult to detect early in the process but can result in whole batches being recalled. For this reason, magnetic filtration is considered to be a good “end of pipe” practice, especially when dealing with bulk powders.

As they can attract and remove particles continuously without having to stop a process, magnets are used in almost every industry to remove ferromagnetic and paramagnetic particles.

The strength of a magnet is usually measured in two ways (which can, of course, be correlated by calculation): the pull test, which measures the force required to remove a piece of metal from the magnet; and the use of a Gauss meter to read the value of the magnet field.

A ferrite magnet produces about 3000 Gauss (typically adequate to attract ferromagnetic materials), whereas a high intensity magnet can produce about 13,500 Gauss (suitable for paramagnetic materials as well). Therefore, every metal can be measured.

Different metals and their magnetic properties

In its natural state, austenitic stainless steel (such as stainless steel 316, which is widely used in pharmaceutical productions) is non-magnetic. This is because of the presence of nickel, which alters the physical structure of stainless steel and removes or inhibits any magnetic qualities.

This may be considered to be an indication that magnetic filtration is not suitable for this kind of metal contamination.

However, when a piece of non-magnetic stainless steel breaks off from the line, such as a blade, valve or from line wear, its atomic lattice strains, forming martensite, which is magnetic and can be removed by magnetic filtration. For this reason, magnetic filters are considered to be an effective way to remove stainless steel contamination as well.

Most of the time, the metal contamination in pharmaceutical powders is readily identifiable and the number of Gauss required to deal with it can easily be found in the literature. 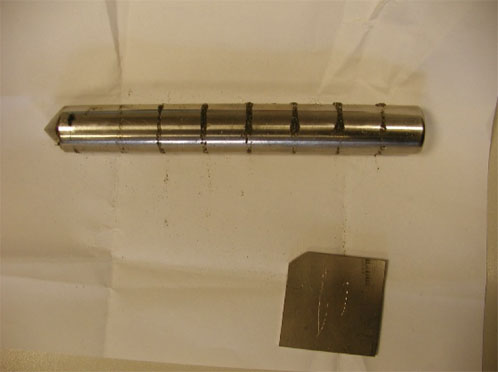 However, if a specific alloy is not yet documented, the best course of action is simply to send a coupon of that metal to the magnetic filter supplier; they will grind part of it and test the shards against various magnets until a suitable strength is found.

In this case, a coupon of Hastelloy C22 can be ground and shards of the sample are tested for paramagnetism using various high intensity rod magnets (Figures 1 and 2). 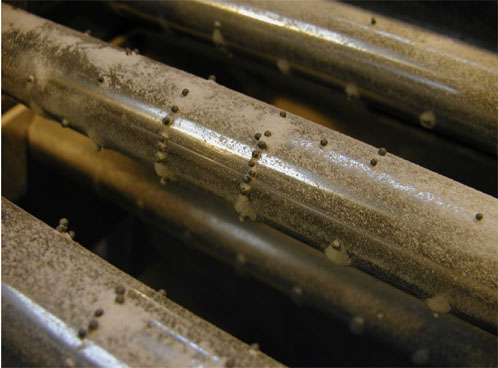 Figure 2 shows that Hastelloy C22 has enough paramagnetism to be used with a high intensity rod and could therefore be removed during magnetic filtration if a magnetic field greater than 9000 Gauss is present. Of course, the same procedure can be followed for any other material.

The neodymium iron boron magnet itself has a poor resistance to corrosion and therefore it is better not to keep it in direct contact with the process.

This is also true for clean-in-place (CIP) treatments that typically require alkaline or acid detergents. For this reason, the equipment that houses the magnet and is in contact with the process is often stainless steel — but it may be treated with an organic coating such as PTFE in specific corrosion-intense conditions.

Of course, distancing the magnet from the process material decreases the magnetic flux density, so maintaining the minimum distance and protection required is recommended.

It is critical that the arrangements to separate the magnets from direct contact with the process material do not cause isolated conduction within the separator.

If an arrangement with a “magnetic door” is to be used, it must be bonded by means of a conducting wire or strip to eliminate any difference in potential between the door and the housing unit. The housing unit itself must be bonded to ensure static can flow between all conductive parts.

Temperature and the effect on magnets

Pierre Curie first noticed that temperature can have a strong effect on magnets. When magnets pass some time at certain temperatures, their performance may change and/or decrease.

The change is generally reversible up to a certain temperature; beyond that, the change becomes irreversible and, at even higher temperatures, all magnetic properties are removed permanently (this is known as the Curie temperature, which is dependent on the specific magnet composition, particle size, pressure and orbital ordering).

Under ambient temperatures, the atoms in a magnet “align” between the two poles, fostering magnetism. When exposed to heat, however, these atoms begin to fluctuate faster and more irregularly.

This movement “misaligns” the atoms, causing magnetism to be lost. Below certain temperatures, the atoms in magnets move progressively slower and less randomly. Aligning the atoms in a more stable way first strengthens the magnetism; then, at even lower temperatures, spin reorientation once again decreases the magnet’s strength.

For most pharmaceutical applications with neodymium iron boron magnets, low temperature effects are unlikely to be relevant, as partial, reversible demagnetisation begins below –138 °C, which is an uncommon processing condition in mainstream pharma. 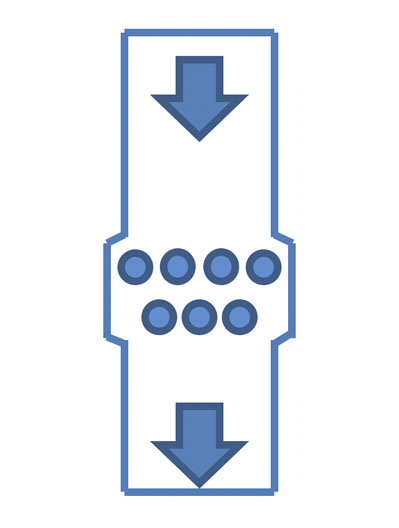 Partial, permanent demagnetisation derived from high temperatures can occur ≥80 °C, which is more likely to happen during pharmaceutical manufacturing, whereas the Curie temperature (above which all magnetisation is lost) is around 320 °C.

As previously mentioned, the temperatures that affect magnetic materials are not exactly fixed and depend on various parameters that can be controlled during magnet production, so the exact temperature thresholds should to be checked with the supplier. 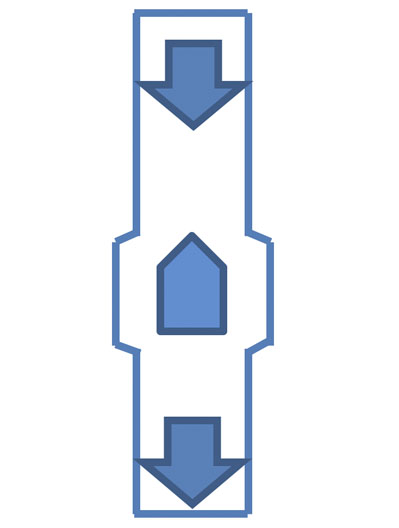 The unit must be regularly cleaned to remove any metal that might have built up on the surface of the magnets. Cleaning can be done manually or, more elegantly, using a fully automated system that moves the magnets outwards to remove the magnetic field from the housing; the captured contamination is then released and can be discharged away from the product flow (Figure 3).

Identifying the right position and the most appropriate design for a specific magnetic filter requires both process knowledge and experience — as there are many possible arrangements and just as many conditions.

It is critical to identify where and when the pull of the magnetic attraction will affect other forces. For example, in a long chute, it’s better to have a magnetic filter near the top — when the speed of the particles is usually lower — rather than near the bottom, where the acceleration of the fall may override magnetic attraction.

If the product is not too corrosive and abrasive, two-layer grids are often preferred to maximise contact with the powder (Figure 4). 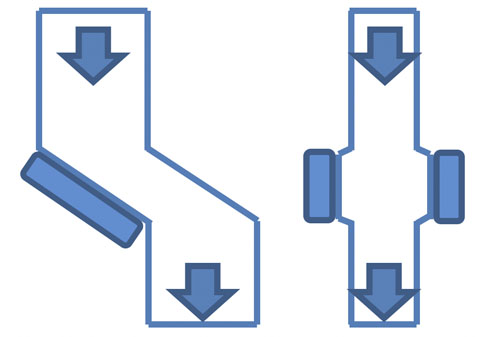 Another common arrangement, which is particularly useful for thinner pipes and/or pressure/vacuum driven transfers, is a “bullet” or inline magnet (Figure 5).

In high corrosion and/or abrasion conditions, it’s more common to use chute arrangements that offer better protection for the magnets (Figure 6).

In summary, not only can magnetic filters offer a suitable and flexible way to remove metal particles from many pharma processes, they are extremely cost-effective too.

This is particularly true when bulk powders are handled, as some of the machines involved in powder production are at risk of causing metal particle contamination.