The incidence of diabetes and pre-diabetes is rising rapidly across Asia, probably due to a combination of genetics, diet and environment. Asia correspondent A Nair looks at how the market is responding 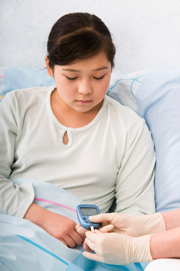 Type 2 diabetes is a growing problem for people from South Asia, whose chances of developing the condition are estimated at between four and six times higher than Europeans.

The global pre-diabetes population is three times the size of the current diabetes patient population. A huge increase in prevalence is in store, and the industry is in dire need of better tools to prevent disease progression.

According to a research paper from Frost & Sullivan, 15 new drugs for Type 2 diabetes are in late-stage development (Phase 3 and preregistration). ‘The Type 2 diabetes market continually advances, primarily due to the dominance of obesity,’ noted a Frost & Sullivan analyst. ‘Current studies of this increasingly competitive market are limited in their approach. Among the many trends we see coming, the pharma industry will address the ubiquity of diabetes by a steady stream of new product launches over the next six years.’

In China diabetes has reached ‘an alert level’; one in 10 adults is thought to be affected, but most are unaware of their condition. In a comprehensive nationwide survey for diabetes conducted in China, some 11.6% of adults, or 114 million, have the disease. The findings were published in the Journal of the American Medical Association. The study increased a 2007 estimate of the number of diabetics by 22 million – equivalent to the population of Australia.

The researchers warned that China could face ‘a major epidemic of diabetes-related complications’, including cardiovascular disease, stroke and chronic kidney disease, in the near future without effective national intervention.

Lead researcher Guang Ning, Vice President of Ruijin Hospital, affiliated with the Shanghai Jiaotong University Medical School, noted that China is now home to the largest diabetes population in the world. The prevalence of diabetes in the Chinese adult population has surpassed that of India and is now close to that of the US. Nearly 50% of the population are at the risk of developing the disease, which means that 493.4 million are estimated to be pre-diabetic.

Ning and colleagues with the China Noncommunicable Disease Surveillance Group investigated the prevalence of diabetes on a nationally representative sample of 98,658 Chinese adults in 2010. A two-hour oral glucose tolerance test was conducted among participants without a self-reported history of diagnosed diabetes.

India currently has about 65 million diabetics, and this number is expected to reach 100 million by 2030

Previously, India had been considered the diabetes capital of the world. However, the introduction of new drugs to tap the fast-growing market has stemmed the spread of the disease. Global manufacturers like Novo Nordisk and domestic majors such as Zydus Cadila, Piramal Enterprises and Emcure Pharma are gearing up with new product launches to grab a bigger share of the pie.

Although the market is crowded, drugs with novel technologies are hitting the market in India. Novo Nordisk launched its long-lasting insulin injection Tresiba in India at the beginning of September. Tresiba is a new once-daily basal insulin for adult patients with Type 1 and Type 2 diabetes, allowing for flexibility in dosing time, without compromising efficacy or risk of hypoglycaemia.

‘The mode of action of insulin degludec ensures that people can alter the time they take their insulin without compromising their diabetes control or putting themselves at increased risk of hypoglycaemia,’ said Novo Nordisk India Clinical Medical and Regulatory Director Raman Shetty.

Zydus Cadila has developed a new class of diabetic drug, Saroglitazar, branded as Lipaglyn, which has received marketing approval from the Drugs Controller General of India. The company claims Lipaglyn is the world’s first drug for treating diabetic dyslipidemia that combines lipid and glucose lowering effects in one single molecule.

Piramal Enterprises is also on the verge of developing a new molecule for diabetes, with the Phase I trials completed in India. Piramal’s molecule, called P7435, has been developed for the management of metabolic disorders such as lipid abnormalities and diabetes.