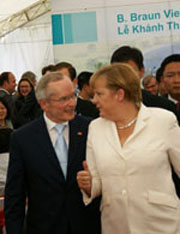 Dr Heinz-Walter Große, chairman of the B. Braun Melsungen Management Board, welcomed the Chancellor and her delegation with the words: ‘It is a great honour to have you as our guest here today’. Following the official opening ceremony, during which the Chancellor cut a symbolic ribbon at the entrance to the plant, she and all other guests were given a tour of the new facility.

Dr Große emphasised that out of 43,000 employees worldwide more than 10,000 work in Asia and almost 1,000 in Vietnam. ‘In Vietnam, as in all its other locations, B. Braun sets great store by providing excellent staff training, especially for young people,’ he continued. The company aims to provide young Vietnamese as well as Malaysian people with vocational training based on its German model. With €700m sales Asia gains more and more importance. ‘Here we see our strongest growth potential in the next few years.’

B. Braun in Vietnam

B. Braun Melsungen has maintained a presence in Vietnam since the early 1990s in the form of a joint venture. In 1992, the company initially opened a representative office in Ho Chi Minh City, followed by other offices in Hanoi, Danang, Can Tho and Hue. In 1996, B. Braun set up its first Vietnamese production facility, an IV solutions plant in Hanoi.

Today, B. Braun Vietnam is a wholly owned subsidiary of the B. Braun Group with a workforce of around 1,000 people. The opening of the new IV set production plant marks a further milestone in the company’s commitment to Vietnam, with 200 new jobs to be created here by next year.

The new production facility in Hanoi is slightly larger than a soccer field, covering an area of 9,800m². It will enable IV set production to be increased from 35 million to 100 million units per year, and to as many as 200 million in the long term.

The production plant was designed and built according to the very latest standards. German technology is used to ensure that production machines conform to the highest quality requirements. The same high standards also apply to the working environment, with ample daylight provided in the production area and a park in which employees can spend their breaks. The building complex also includes an area for providing medical care.

IV sets are used to administer and dose IV solutions, generally connecting the IV container to the patient’s IV catheter. The core element is the ‘drip chamber’, which is used to check the speed of infusion and as a valve for protecting against air infusion.

Special safety features of the IV sets include particle filters, bacteria-tight insulation and an ‘AirStop’ membrane, which prevents air from entering the tubing when the IV container is empty.