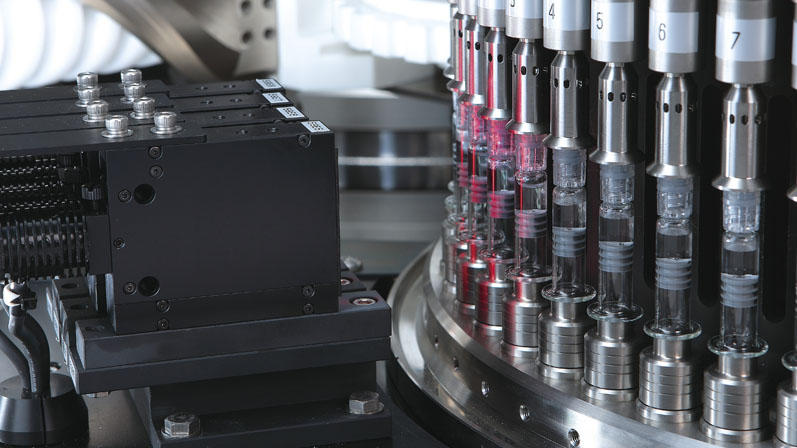 According to the International Diabetes Federation, 12% of global health expenditure is already spent on diabetes treatment—an alarming figure that is increasing at a rapid pace. Nevertheless, there is also good news: new therapies have turned a once deadly disease into a chronic one and pharmaceutical companies are making insulin available across the globe. To maintain the stringently high safety and quality standards, insulin producers need both sophisticated filling technology as well as advanced inspection systems to protect both product and patients.

Human insulin is obtained from bacteria using biotech-based methods. Since 1996, modified insulins have also been approved. Referred to as insulin analogues, they work particularly quickly or uniformly. During the past few years, insulin analogue patent expirations have triggered the market entry of biosimilars in many countries, leading to different manufacturing processes and stricter inspection requirements.

Insulin is delivered either as a solution or as a suspension. Whereas a solution is a homogenous mixture in which one substance is dissolved in another and cannot be separated, a suspension is a mixture of liquids with solid particles that may not dissolve in the liquid. The latter presents a challenge during visual inspection.

In the treatment of diabetes, pen systems that can be equipped with insulin cartridges and injection needles have long surpassed all other delivery systems, mainly because of their ease of use and relatively inexpensive production. The insulin pens are loaded with cartridges — a glass cylinder that is closed on the top end by an aluminium cap with a puncture membrane and, at the bottom end, with a rubber stopper.

Although easy and safe handling is the most important criterion for patients, insulin manufacturers must pay particular attention to sterile filling and to the integrity of both the product and the packaging materials used.

Focus on product safety and quality

Manufacturers, physicians and patients alike are scrutinising product quality more closely than ever … and production processes are subjected to the review of regulatory agencies. The pharmaceutical industry is looking to reduce manual intervention during the production process as much as possible.

Modern barrier technology completely seals off products, processes, equipment and operators from each other. Restricted access barrier systems (RABS) ensure effective separation in the sterile room. Insulin manufacturers increasingly rely on the use of isolators, which are an optimum solution for both product and operator protection. 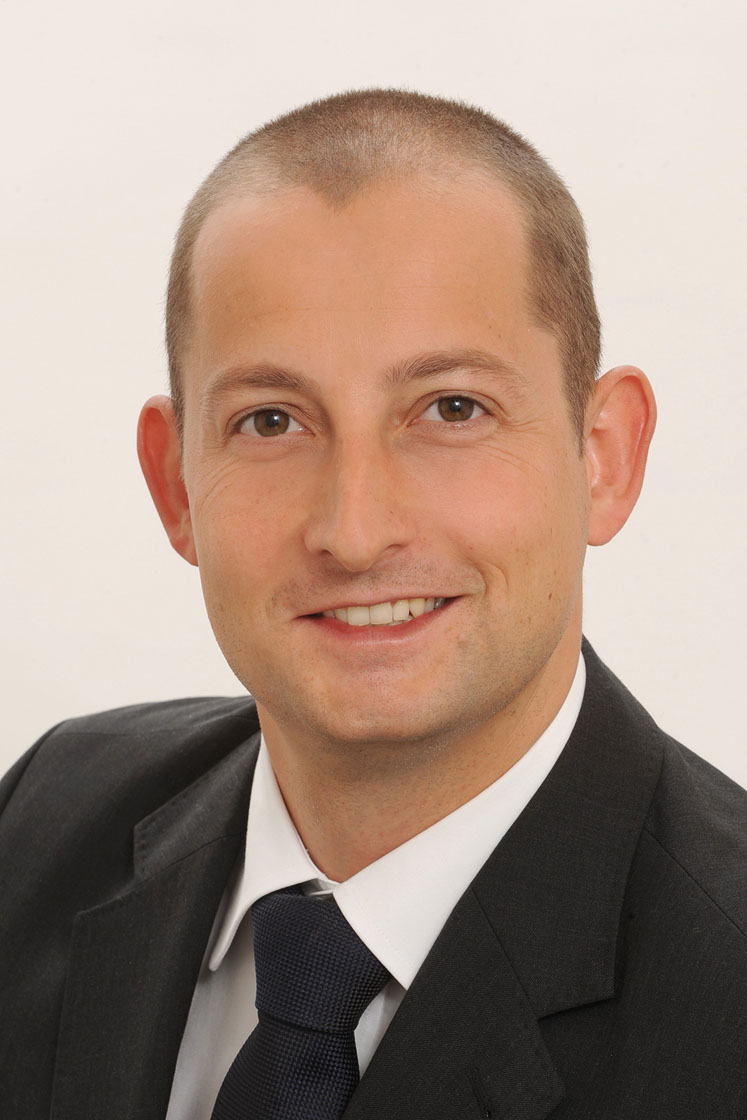 Compared with conventional cleanrooms, they ensure a higher sterility assurance level (SAL) at lower operating costs. Moreover, robotic solutions are used to a great extent to handle the cartridges during the filling process.

Processing cartridges involves many steps: washing, siliconising, sterilising, filling and closing in the isolator device, then inspection and tray loading. The cartridge is exposed to different temperatures, pressures and movements during these procedures.

Filling and closing machines with a capacity of up to 600 units per minute are considered to be state-of-the-art and are installed in the market in large numbers. The higher the speed, however, the more the containers, stoppers and caps are subject to physical stress. This is when inspection technology comes into play: it is a key quality safeguard for pharmaceuticals and contributes significantly to patient safety.

From container defects to particles

Cosmetic container defects can, for instance, be detected using sophisticated camera technology. But cracks, chips or fractures that lead to breakage on the way to the patient or during usage are not the only risk for insulin cartridges. The product itself can also be contaminated.

Product contamination implies the undesired introduction of impurities of a chemical or microbiological nature, or of foreign matter into or onto a raw material, intermediate or API during production, sampling, packaging, storage or transport.

Intrinsic contamination can occur during the many steps of the filling and closing process and include packaging material particles, or process-generated matter such as metal or glass. Extrinsic particulate matter, by contrast, has its origin in the production environment and can consist of dust, fibres or biotic containments, or even human hair or skin. Inherent particles, finally, are those that originate from the formulated product itself.

In general, particles are classified as subvisible up to a size of 100 µm. They pose greater risks to patients from a clinical perspective as they are present in all solutions to a certain extent and cannot always be fully identified. From 100 µm onwards, we talk about visible particles. As a point of reference, most automated inspection machines can detect particles down to a size of 50 µm.

Automated particle inspection systems have their origins in the 1970s. One of the original automated inspection principles is the static division (SD) system, which was developed by Eisai Machinery, now part of Bosch Packaging Technology. The SD system derives its name from the ability to differentiate static from moving objects.

It transmits light through the solution, which is then focused onto a linear array of optical sensors. Before inspection, the container is rotated to put the liquid contents and any present particles in motion … and then suddenly stopped. After the container is immobilised, the liquid and any present particles continue moving by inertia during a definite time, during which signals from the SD sensor array are read out.

The moving foreign particles momentarily block a portion of the transmitted light, casting a shadow across the sensors, which is detected as a time-dependent differential signal. These differential changes in light intensity can only be caused by moving particles, in contrast to any other possible static shadow arising from smears or defects in the container.

In such a way, only actual particles are detected using a very simple method without interference from physical features on the container. Since its introduction in 1975, the SD technology has undergone various improvements and currently inspects most parenteral products in clear solutions in more than 50 countries worldwide.

For particle inspection, SD technology is still the preferred choice by many. Nevertheless, there are several use cases wherein camera systems can be an alternative or an add-on feature to support automated vision systems delivering high quality particle inspection results.

Hence, choosing the suitable camera hardware can be a key decision in designing an inspection system. Line scan cameras, for instance, are especially useful for the detection of particles in suspensions. These cameras are typically used, amongst others, to inspect insulin cartridges for particles that stick to fixed areas such as the stopper or the glass surface.

Moreover, line scan cameras help to identify and verify the mixing balls in cartridges, which are needed to achieve better homogenisation of the suspension. 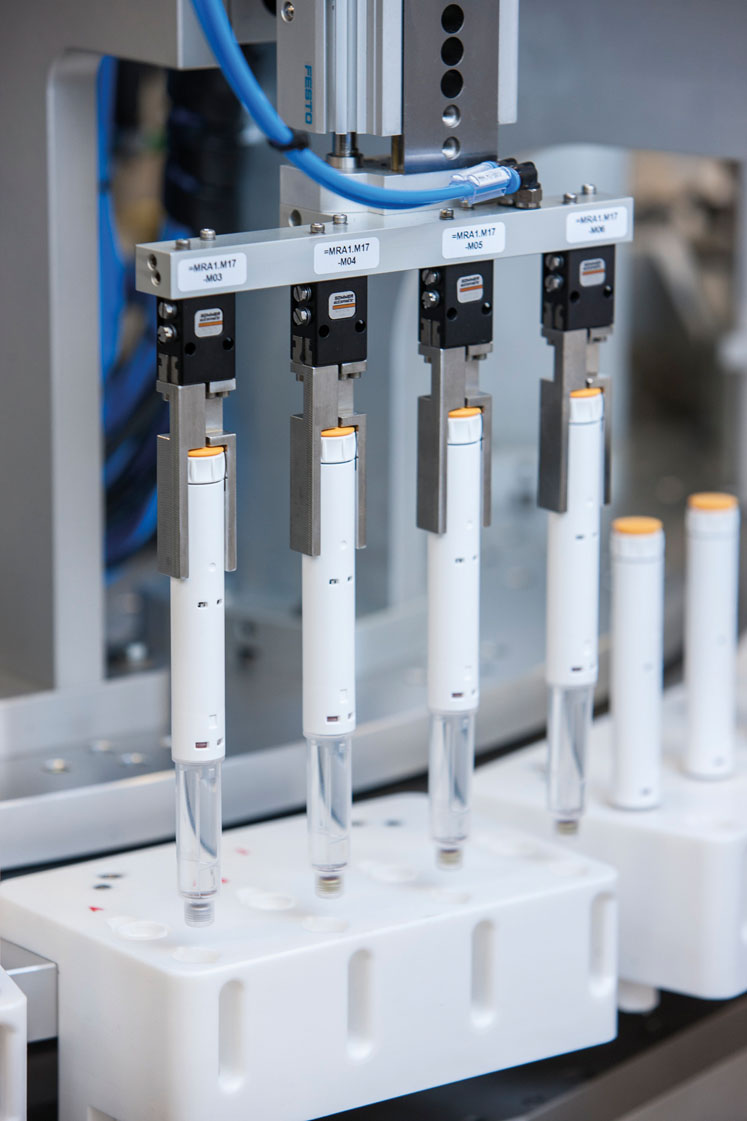 These systems can be highly complex, as they need to cover the entire container and inspect it from many different angles. Hence the most important question to answer when developing such inspection technology is which defects are truly critical.

For insulin applications, several distinct positions of the cartridge need to be carefully examined. The cartridge neck is especially prone to cracks, which are not easy to detect. Some insulin products are filled with a small air gap at the top of the cartridge. The main challenge is distinguishing between measuring the filling level and detecting potential cracks.

Both the upper and lower body of the cartridge must be inspected for cracks in separate sections. Bottom cracks from the side and from below are especially critical because this section presents the plunger side interface to the injection pen later during the manufacturing process. These cracks can lead to cartridge breakage during pen application.

Some inspection machines for insulin cartridges are equipped with more than 30 different camera stations. This allows pharmaceutical manufacturers to differentiate between different error categories and classify them into minor and major defects. This enables them to draw important conclusions about the production, filling and packaging process — and to continuously improve the quality of these processes.

Cost pressure is omnipresent in the highly competitive insulin market. Consequently, manufacturers can only generate profit through higher production volumes. In addition to the cost factor, the growing number of diabetes patients in the emerging economies has driven major insulin manufacturers to expand their production to more and more locations worldwide.

Machines for the processing of cartridges for insulin pens are increasingly used particularly in the so-called “pharmerging” markets, such as India, Russia and China. The criteria for insulin lines are output, high availability, reproducible precision and the highest levels of safety.

To meet the industry’s rapidly changing requirements, new high-end machines offer a hybrid approach by integrating both SD and camera-based inspection technology in one flexible platform. This enables pharmaceutical manufacturers to adapt their inspection items and processes to their individual needs.

Moreover, a modular machine design facilitates the expansion of existing systems by additional inspection units or an extra inspection module. These machines aim at high detection rates and are particularly suited for suspensions such as insulin.