GlobalData, a specialist data and analytics company, expects that 2018 is likely to be Merck’s year in terms of research and development collaboration 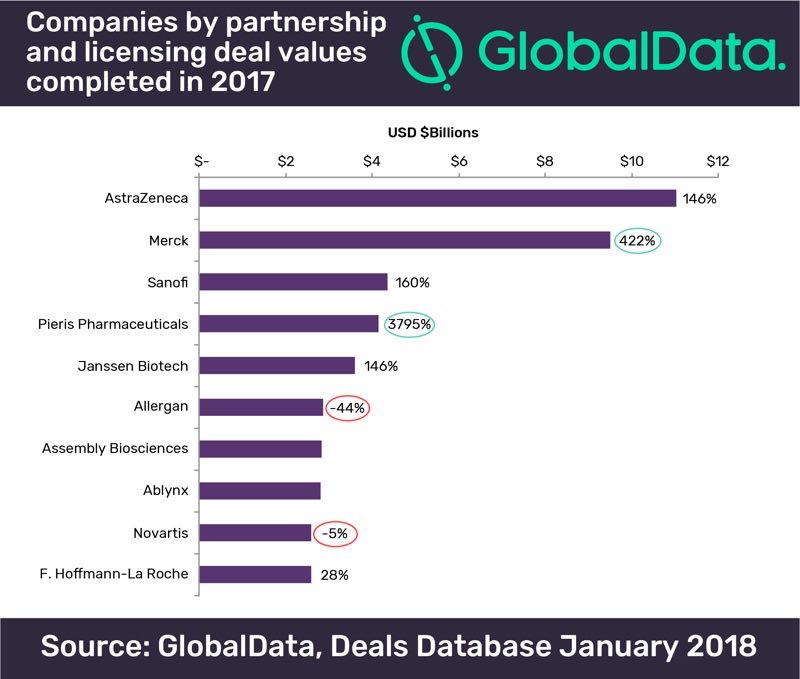 The pharmaceutical industry is highly volatile, with promising lead candidates making or breaking a company’s year.

Companies’ financial success is often down to the strategic deals they are able to make with other pharmaceutical companies and research organisations to enable them to develop the next leading drug in the market, observed GlobalData.

The $8.5 billion agreement between AstraZeneca and Merck to co-develop AstraZeneca’s Lynparza (olaparib) for multiple cancer types puts the two companies at the top for strategic alliance spending for 2017. AstraZeneca just clinched the top spot from Merck with its development deals with Pieris Pharmaceuticals and MedImmune.

Lisa Marris, Healthcare Analyst at GlobalData, said: “Despite this, Merck has had an arguably more successful year. It more than quadrupled its alliance deal values since 2016 and if its subsidiaries are added to the equation, its 2017 deal values rise to $9.5 billion, an increase of 248% from 2016, whereas AstraZeneca and its subsidiaries stayed almost stagnant at $11 billion.”

“Pieris Pharmaceuticals also saw a good year, making alliances in 2017 worth more than 35 times those it made in 2016. However, it is unlikely to do as well this year, as the 2017 value was primarily due to its $2.2 billion co-development deal with AstraZeneca, alongside a $1.8 billion licensing agreement with Les Laboratoires Servier.”

“The development agreement with AstraZeneca will help Pieris enhance its inhaled drug candidates for respiratory diseases, whereas the collaboration with Servier will advance Pieris’ immune-oncology programmes, led primarily by PRS-332, a PD-1-targeting bispecific checkpoint inhibitor.”

Allergan and Novartis both experienced slower years than 2016, with decreases in partnership and licensing deal value by 44% and 5%, respectively. However, both companies still closed big deals in 2017.

Novartis entered into almost double the number of deals it had in 2016 and closed two $1 billion deals in cardiovascular and eye indications with Ionis Pharma and Tribos, respectively.