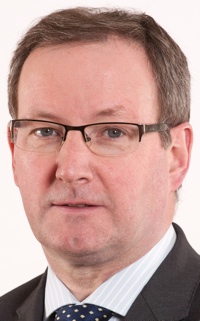 Professor Johnston, formerly Dean of the School of Medicine, Dentistry and Biomedical Sciences at Queen’s, is the 12th Vice Chancellor in the University’s 168-year history.

Since 2007, he has led the development of a new international Medical School at Queen’s and a world-leading Institute of Health Sciences. He is also a former Director of the Centre for Cancer Research and Cell Biology at Queen’s.

In 2012, he was recognised for excellence in medical science when he was elected to the Fellowship of the Academy of Medical Sciences. In the same year, he received a Diamond Jubilee Queen’s Anniversary Prize awarded by Her Majesty The Queen, for the University’s leadership of the Comprehensive Cancer Centre and its achievement in reducing cancer mortality rates in Northern Ireland over the last decade.

Professor Johnston was appointed chairman of the Translational Research Group of the Medical Research Council (MRC) in 2012. He received the 2013 international Bob Pinedo Cancer Care Prize, recognising his pioneering work in translating discovery science for the benefit of cancer patients. He also serves on the Cancer Research UK (CR-UK) Science Executive/Advisory Board.

In addition to his academic work, Professor Johnston is a founder of Almac Diagnostics, which is headquartered in Northern Ireland, and the Society for Translational Oncology, headquartered in Durham, North Carolina.