The development and production of sterile injectable medicines is one of the core competencies of leading Indian pharmaceutical manufacturer Zydus Cadila, headquartered in Ahmedabad. Vaccines, gastro-intestinal and cardiovascular drugs as well as anti-infectives and therapies for respiratory diseases are central pillars of the company’s portfolio.

Ever since its extensive restructuring in the mid-1990s, Zydus Cadila has grown dramatically. The company reports sales of more than US$1bn annually and currently employs about 13,000 staff on four continents. Eight production sites in India, the US, Brazil, South Africa, Spain, France and Japan serve customers around the globe. Between 2009 and 2010 alone, the company launched 14 new products – including eight generics.

At the end of 2011, Zydus Cadila decided to increase its production capacities for pharmaceutical liquids by investing in new equipment. Romaco’s Macofar VF 18 aseptic liquid filler was chosen to meet this challenge. The machine was shipped within six months of the order being placed and installed at Zydus Cadila’s headquarters in Ahmedabad in May 2012. It has been operating in three shifts ever since, filling sterile injectables into vials.

‘We were looking for a high-speed machine at very short notice to fill parenteral products and help us cope with the rapidly expanding demand for our injectable preparations,’ says Gaurang Purohit, General Manager Projects and Engineering, Zydus Cadila.

The Macofar VF 18 achieves a maximum filling speed of 18,000 vials an hour. The sterile products currently manufactured by the liquid filler are freeze-dried immediately after filling. This method is increasingly common in the industry because many APIs are more stable and have a longer shelf life after freeze-drying. Prior to administration, the lyophilisate is dissolved in sterile water and then injected directly into the body.

Pharmaceutical liquids destined for freeze-drying are first filled into DIN/ISO-compliant, 4R tubular glass vials. Vials with a height of 68mm, for instance, are just 16mm in diameter. In this case, the filling volume is as little as 1.8 millilitres (ml) per vial. The reason for this low fill level is that downstream, during the lyophilisation process the product expands.

Filling these tall, slim vials at high speed is technically complex. The vials have to be optimally stabilised for processing on the automatic line. The Macofar VF 18 offers multiple benefits when unstable containers are involved: an infeed screw and starwheel separate the vials on their way to the dosing and stoppering stations. 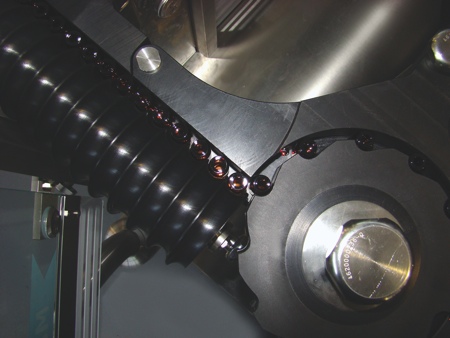 Thanks to the positive transport system, these unstable containers are guided safely to the various stations participating in the aseptic filling process. Several servo systems control the transfer, filling and stoppering steps, which ensures that the thin-walled glass containers do not topple over or break.

The product is filled by means of eight rotary piston pumps, with ultra-precise dosage a defining feature of the system. For the filling volume of 1.8ml, the maximum possible error is no more than ±0.5%. The vials are sealed with a notched rubber stopper, which is only inserted about half-way to allow for the downstream freeze-drying process. The vials can then be transferred directly to the freeze-dryer.

One Zydus Cadila operator per shift is responsible for overseeing the Macofar VF 18 aseptic liquid filler. This compact machine is installed in a cleanroom with laminar flow air conditioning. With a footprint of only 3m2, it is extremely compact and inexpensive to maintain. ‘The Macofar technology is optimally integrated into our cleanroom environment,’ says Purohit proudly. ‘What’s more, it’s very easy to retool and operate – and in pharmaceutical production that’s a crucial advantage.’ 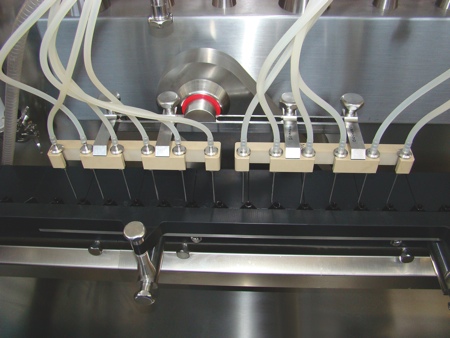 Strict safety and hygiene regulations intended to protect both the product and its consumers apply when processing sterile parenterals. The concentration of particles and micro-organisms must be kept to an absolute minimum during filling and stoppering. The cGMP compliant design of the Macofar VF 18 fulfills these requirements in a number of respects. A selective laminar flow prevents turbulent air movements in the vicinity of the open vials. The clean design of the machine additionally hinders particle formation in the critical zones.

When complex technologies are introduced, reliable service is a must. On-site customer support begins when a new machine is installed and commissioned. Special technical training is recommended for all operators, and there is also maintenance and repair work to be done from time to time. Income Marketing, of Mumbai, is Romaco’s representative in India. Managing Director Vishesh Parekh maintains close contacts with local users of Romaco technology. Once every month on average, he flies to Zydus Cadila to discuss any important matters in person. A hotline that enables Income to be reached 24/7 exists as an alternative. A qualified technician is on hand immediately if prompt action is necessary.

‘Income’s trusty service was a key factor in our decision to award the contract to Romaco Macofar,’ Purohit says. ‘Machine downtime and other disruptions cost a lot of money. Thanks to the successful co-operation with Income and Romaco, however, that’s something we never need to worry about.’ For more than two years now, the Italian-built aseptic liquid filler has been producing parenterals for hospitals and doctors’ surgeries in India without a hitch.