Biological drugs can have short plasma half-lives, which can result in reduced bioavailability, requiring larger and more frequent doses of medication and leading to greater incidence of side-effects, reduced patient compliance and increased healthcare costs. The concept of fusing small molecules to albumin to extend the half-life of drugs is well established, and a new technology from Novozymes permits flexibility allowing drug development scientists to tailor protein or peptide half-life to specific medical needs.

Different techniques have been developed to extend serum half-life of protein therapeutics, but these have not offered the flexibility to adjust the drug’s half-life to suit specific patient needs. Now Novozymes believes that albumin fusion technology is set to change that by allowing flexible control of the half-life of biologicals.

Rising healthcare costs are putting pressure on researchers to create more effective, tailored drugs. At the same time, pharmaceutical companies are increasingly finding it a challenge to take drugs through clinical trials. In response, researchers are investing in the development of biological drugs that take a much more targeted approach.

A common problem when using biological drugs is that they can have short plasma half-lives, which can result in reduced bioavailability because the human body clears the drug in as little as seconds. As a consequence, patients suffering from chronic conditions require larger and more frequent dosages of medication, which can lead to greater incidence of side-effects, reduced patient compliance and increased healthcare costs.

To address these issues, there has been a focus on developing technologies that can extend serum half-life of protein-based therapeutics. The most common methods currently being employed are those that increase hydrodynamic volume (PEGylation) or those that use FcRn-mediated recycling (albumin fusions).

A common problem when using biological drugs is that they can have short plasma half-lives, which can result in reduced bioavailability

Researchers have known for many years that antibodies bind to specific protein receptors and this is responsible for their transportation around the body. However, in the past few years it has been discovered that albumin binds to the receptor at a different place. Although this was well understood, researchers did not know exactly where on the receptor it bound.

Novozymes’ Albufuse technology has already proved effective in man, and the concept of fusing small molecules to albumin to extend the half-life of drugs is well established in literature. However, to date no technology has allowed researchers to be flexible with the drug’s half-life or provided the ability to design protein half-life to deliver the required pharmacokinetics.

Following years of research, Novozymes has resolved the complex interaction between albumin and its receptor. From this discovery, the company has developed the Albufuse Flex albumin fusion technology to serve as a flexible drug delivery platform, allowing drug development scientists to tailor protein or peptide half-life to specific medical needs. The new technology has been built upon the company’s existing Albufuse platform. Through subtle modification of the albumin molecule, the technology enables the flexible tuning up and down of the circulatory half-life of the albumin molecule itself.

In contrast to protein therapeutics, which are generally cleared from the body within a range of minutes to hours, serum albumin displays a long serum half-life of 19 days in humans. Apart from its size, it is the pH-dependant recycling through the neonatal FcRn receptor that protects albumin from renal clearance and is responsible for its extended half-life. Like IgGs, albumin is taken up by cells through nonspecific pinocytosis and is protected from intracellular degradation through pH-dependant binding to the FcRn in acidic endosomes. This interaction with the FcRn allows albumin to then be recycled back to the cell surface where it is released into circulation due to the physiological pH of the blood (Figure 1).

Understanding the interaction between albumin and FcRn and its impact on albumin half-life has enabled the engineering of this interaction with the potential to modulate albumin’s half-life. Previous studies, which altered the interaction between IgG and FcRn, have been shown to affect the pharmacokinetics of the IgG. Applying these same kinetic principles, the Albufuse Flex technology is able to modulate protein half-life through construction of albumin variants with altered binding affinity to FcRn.

In collaboration with scientists at the University of Oslo, analysis of natural polymorphisms, cross species binding studies and sequence alignments have identified potential amino acids involved in the binding of albumin to FcRn. Subsequently, numerous albumin variants have been generated with single amino acid substitutions. Binding affinity studies of each albumin variant to FcRn at acidic pH have identified single amino acid positions capable of generating a range of affinity variants with distinct binding differences. Variants have been measured with both increased and decreased receptor binding affinities, potentially translating to modulation of albumin half-life.

Although extension of the therapeutic’s half-life is generally pursued, in situations where a drug is highly toxic a reduced protein half-life may be desirable. It is this flexibility of the technology to modulate albumin half-life that enables drug development scientists to control and tailor their drug design.

Albufuse Flex has been specifically designed to enable users to adapt and control the pharmacokinetics of their target protein or peptide while retaining efficacy. The technology can increase a protein’s half-life from minutes to hours, and from hours to days. It can thus be used to control flexibly the half-life of the drug so that it stays for longer or shorter periods in the human body, depending on what it is being used for. This flexibility to extend or reduce the half-life of proteins allows drug manufacturers to improve treatment regimes and create novel drugs tailored to the specific needs of patients suffering from chronic or acute conditions, such as diabetes.

Because only a small number of biologics are currently on the market, companies have to look at those that are available and adapt and improve them to make the best of what is obtainable

Because only a small number of biologics are currently on the market, companies have to look at those that are available and adapt and improve them to make the best of what is obtainable. The new technology will allow companies to establish a niche position in the market with a novel and flexible product.

On both a commercial and patient-centric level, the innovation will be a game-changer within the drug-delivery market due to its ability to ease the lives of patients who are suffering from chronic illnesses. The technology could lead to lower and less frequent dosage levels for patients who need to take regular medication, resulting in increased patient compliance and the possibility for patients to administer their own drugs.

Alternatively, proteins can be genetically fused to the N or C terminus or even to both ends of the albumin variant. Using a contiguous cDNA of the target protein or peptide with DNA encoding the albumin variant of choice allows the generation of protein fusions exhibiting the required binding characteristics.

When genetic fusion is applied, Novozymes’ proprietary yeast expression system provides a high quality, consistent and reliable supply of the protein of interest. Based upon strains of Saccharomyces cerevisiae originally developed for the production of a recombinant human albumin (Recombumin), this expression system delivers high levels of secreted product into the supernatant of shake flask and high cell density fed-batch fermentations.

To test that the albumin variants would maintain their modified FcRn binding affinity when fused to a protein or peptide, a range of albumin protein fusions have been generated. The variants chosen displayed a range of binding affinities from low affinity albumins (HSA K500A) to albumins with 15-fold increase in receptor binding (HSA K573P).

Antibody fragments fused at the C-terminus, N-terminus or bivalent forms as well as fusions to small or large peptides were compared with unfused albumin variants for FcRn affinity by SPR using Biocore technology (Figure 2). All albumin fusions tested showed distinct differences in receptor affinity correlating to their unfused variant. Each fusion demonstrated the same changes in ScRn binding as the control rHSA variant. 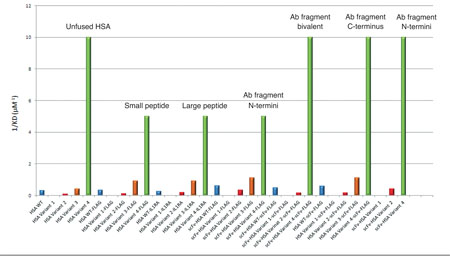 Figure 2: Albumin variants selected for their different FcRn receptor affinities were genetically fused to a variety of proteins and peptides. Each fusion was tested was found to maintain similar affinity for FcRn receptor when compared with the unfused variant

The flexibility of the technology enables proteins and peptides to be bound at either the C- or N-terminus or both, generating fusion molecules with monovalent, bivalent or bispecific affinity. In addition to protein- or peptide-based drugs, the technology also serves as a delivery vehicle for small molecules, providing a broad scope of usability.

In conclusion, the huge market demand for drugs that work more effectively and have a longer life span has led to the development of a range of half-life extension platforms. However, half-life extension platforms are often created using synthetic materials, while also being unable to tune the half-life of a drug up and down, dependant on patients’ needs. The latest advances in the field offer drug manufacturers the flexibility to control their drug design by increasing or decreasing its half-life according to the specific drug development requirements.

For the first time, the relationship between albumin and its receptors has been resolved

For the first time, the relationship between albumin and its receptors has been resolved. Additionally, Albufuse Flex has been developed using a natural, abundant protein, which is already present in the human body, thus it offers a natural, low-cost and safe molecule.

Since it was patented and introduced to the market, the technology has been picked up by a number of small and large pharmaceutical companies focusing on developing therapeutics in the fields of diabetes, obesity, fertility and haemostasis. Albufuse Flex is currently being used by two top 10 companies in the global pharmaceutical industry, which are working with the technology to see how it can benefit the efficacy of their therapeutics.

Novozymes aims to build upon the benefits of the new technology and will continue collaborating with partners to discover what their drug profile needs are for treating a specific disease state. This will lead to the delivery of bespoke solutions through engineering and manufacture of the albumin molecule.