The importance of taste in pharmaceutical development 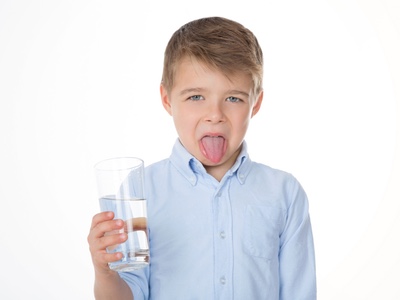 Given the inherently bitter taste of most active pharmaceutical ingredients, a key challenge for developers is how best to use flavourings and taste-masking technologies to make oral dosage forms taste pleasant. This is particularly important for user-friendly oral dosage forms because they spend longer in the mouth and are tasted more thoroughly.

In this article, we consider the importance of taste in formulation development. We also look at how electronic tongue technology can overcome some of the practical and ethical challenges of taste testing, delivering more reliable results and reducing development time and costs. When it comes to developing orally administered medicines, tablets and capsules are often the “go-to” dosage form for the pharmaceutical industry. However, it is frequently underestimated how many people find swallowing them challenging.

In fact, a recent study conducted in the US and Germany found that more than half of those surveyed experienced difficulties swallowing tablets and capsules — with around a third describing the problem as serious.1 Many reported tablets and capsules becoming stuck in the throat. Others found that they had an unpleasant odour or taste — a phenomenon formulation experts often negate, as the common understanding is that tablets do not exhibit any taste properties.

And these swallowing difficulties aren’t just inconvenient, they can have a major impact on patient adherence to a treatment regimen. The same study found that 32% of those questioned broke the tablets into smaller pieces before swallowing, 17% crushed them and dissolved them in water, and 9% chewed them. All of these actions can negatively affect the active pharmaceutical ingredient (API) release profile and, therefore, medical efficacy. Most worryingly of all, 8% resorted to not taking their medication at all.

Luckily, there is a more convenient alternative. User-friendly dosage forms, which include effervescent tablets, orally disintegrating granules (ODGs), chewable tablets, lozenges and instant drinks, are becoming increasingly popular with patients and consumers, and overcome many of the limitations associated with conventional tablets and capsules (Figure 1). Rather than being swallowed whole, these dosage forms can be chewed, sucked or consumed as a drink, making them easy to swallow — even for children, elderly people and those with dysphagia. 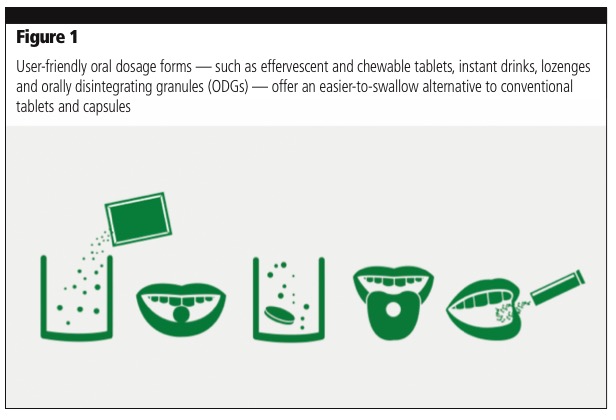 However, as user-friendly dosage forms spend longer in the mouth, they are tasted and smelled more intensely. With taste being one of the most important factors that determines acceptability and patient compliance, this presents both a challenge and an opportunity for pharmaceutical companies to develop a formulation that not only delivers a pleasant tasting oral experience, but one that can really differentiate the product in the market.

The perception of taste

We rely on a combination of sensory stimuli to form an impression of the things we consume. Appearance, smell, texture and taste all influence this perception. This is as true for the medicines we take as it is for the food we eat.

The human sense of taste has been refined throughout our evolutionary history and is designed to protect us from harm as much as it is to allow us to enjoy our favourite foods. Toxic substances will often taste bitter, whereas sweetness is usually associated with safe food and energy. It’s also possible for taste to result in pain by activating pain receptors — such as eating a particularly hot chilli pepper, for example.

Our sense of taste is mediated by taste buds, which are located around the four types of gustatory papillae — the small structures on the upper surface of the tongue, soft palate, upper oesophagus and epiglottis (Figure 2). Although most taste receptors are located in the oral cavity, we also have some in the stomach, which is why some substances can induce vomiting when they reach the stomach. Each taste bud possesses a small taste pore, through which fluids in the mouth interact with the surface of its taste receptor cells. Each taste bud consists of approximately 50 taste receptor cells that can be stimulated by substances dissolved in saliva. 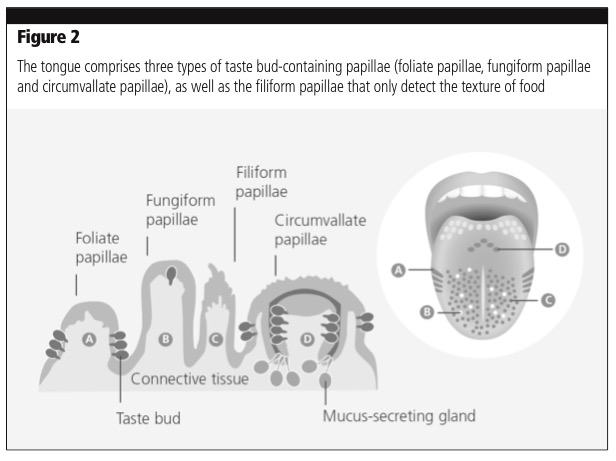 There are five basic tastes that these receptors allow us to detect: saltiness, sweetness, bitterness, sourness and umami (which comes from the Japanese word for “delicious” and is often described as “savoury” in English). It’s estimated that we each possess around 10,000 taste buds in the early stages of our lives. However, as we age this number decreases, resulting in altered taste sensations in later life. And age isn’t the only factor that changes our perception of taste — some medicines and medical conditions can change how we experience this too.

Improving the palatability of pharmaceuticals

It should come as no surprise that patients and consumers are more likely to take their medicines if they taste and smell good. Unfortunately, many APIs have an unpleasant taste; they may be bitter, salty or sour, and even metallic or astringent. In recent years, the pharmaceutical industry has been investing in technologies designed to mask unpleasant tastes and odours in medicines. The use of physical barriers to coat API particles using techniques such as hot melt coating can be a very effective way of preventing the poor taste of some APIs coming through in the mouth. The addition of sugars, sweeteners and flavouring excipients is also an important part of developing a pleasant tasting formulation.

However, developing the taste and aroma of a particular product is not as straightforward as simply picking your favourite flavour from a menu. Without the expertise of experienced formulation scientists, creating a pleasant or even neutral-tasting product can involve a lengthy trial and error process.

Furthermore, the success of flavourings is strongly dependent on the target patient age and their geographic location, and should also work in harmony with the product itself. An often overlooked point is that some API and flavour excipient combinations work better together than others; sour tasting APIs, for example, are best taste masked with sour flavoured excipients such as citrus or berry, rather than sweet flavourings such as banana or peach. Having a firm understanding of the nuances of taste prior to designing a product is therefore very important to ensure that medicines meet the needs of target patients or consumers.

The traditional approach to judging the success of taste-masking efforts is the use of human taste trials, in which panels of individuals record their impressions via a questionnaire. Although this approach is relatively straightforward for the development of foods and drinks, for medicinal products, it’s significantly more challenging because of the ethical implications of giving healthy people pharmaceuticals that could lead to undesirable pharmacological effects.

Pharmaceutical taste testing is essentially a clinical study and must therefore be approved by an ethics committee. As such, the process is often lengthy, tedious and costly, with only a few samples able to be tested during each study. And, of course, if the taste of the test samples is not satisfactory, the whole process must be repeated. Another limitation of human tasting panels is intra- and inter-individual variability. As sensory impressions are subjective, results can vary significantly, regardless of how well panels are trained and calibrated.

A solution to the ethical and variability challenges associated with testing the taste of pharmaceuticals is the use of an electronic tongue. Like the human tongue, the electronic version can perform a comprehensive taste assessment of a complex mixture of dissolved organic or inorganic compounds. In addition to the basic tastes of sweet, salty, sour, bitter and umami, electronic tongues can also detect metallic, pungent or astringent gustatory components. Samples can then be compared, based on their taste profile.

Unlike human testing panels, the data generated by the electronic tongue is not subjective, enabling a reliable comparison of taste profiles between different substances. Electronic tongue instruments, methods and data can be qualified and validated, making this approach particularly suitable for the pharmaceutical industry. Evaluations of taste can be incorporated into both stability studies and formulation development, potentially reducing drug development times and costs. For example, the electronic tongue can be employed in the early stages of formulation development to eliminate flavours that do little to improve the palatability of a formulation.2

Electronic tongues comprise three key elements: a sensory array, signal emitting and receiving equipment and a pattern recognition component. Electric signals are generated as potentiometric variations. Statistical software is used to interpret and translate the sensor data into taste patterns. This can be done graphically or mathematically. Using a graphical assessment, the different sensors are depicted in a radar plot and the taste profile can be compared visually. Alternatively, the signals from the different sensors can be processed by multivariate data analysis such as a principle component analysis (PCA) (Figure 3). 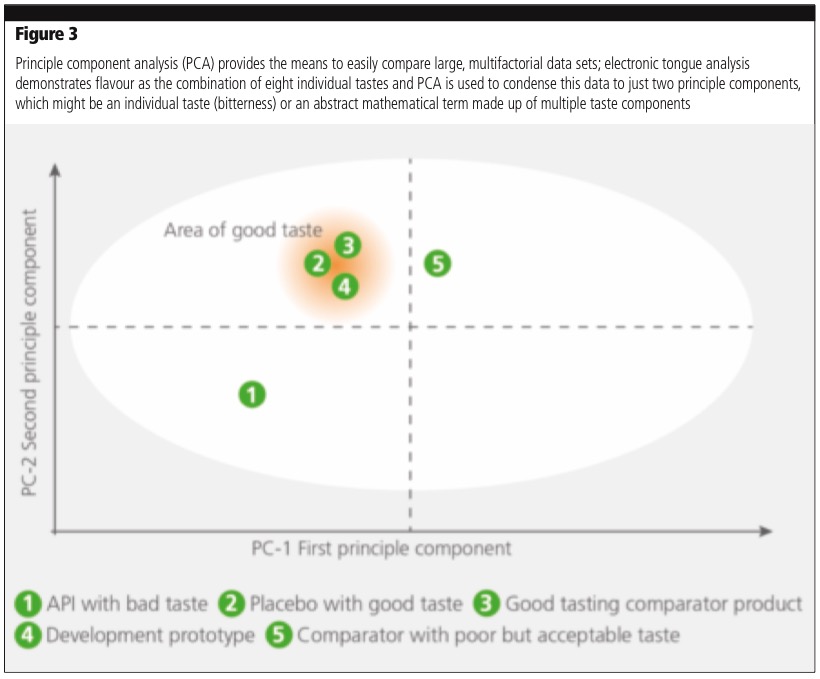 Electronic tongues rely on samples to be in liquid form for analysis. Solid formulations such as tablets must therefore be at least partially dissolved prior to analysis. This step should replicate as closely as possible the physiological process wherein the dosage form is partially dissolved by insalivation during intake. For example, dosage forms such as ODGs only dissolve partially in the mouth. So, analysis should only be done on the fraction that dissolves before swallowing. This can be achieved in the laboratory by the addition of “artificial saliva” for a comparable time that ODGs would spend in the mouth prior to being swallowed (typically less than a minute). This partially dissolved mixture can be filtered, and the solution analysed using the electronic tongue. An assessment of aftertaste can be made by dissolving the ODG completely, and comparing it with the sample dissolved for the shorter time period.

There are two key approaches to formulation development using an electronic tongue: top-down and bottom-up. A top-down approach is used when a good tasting comparator product is available. In this case, the aim is to match the taste of the product under development to this reference product as closely as possible, which is particularly suited to the development of generic products. In some cases, data about the acceptance of the comparator may be available, which can be particularly useful if the target group is difficult to access (such as for paediatric formulations). The PCA plot in Figure 3 shows how the final formulation should be close to the placebo formulation (and comparator) and distant from the API.

A bottom-up approach, by contrast, is used when there is no comparator available. Here, a pleasant tasting placebo is created and assessed both by an electronic tongue and organoleptically in a human taste trial. Excipients are then added to the unpleasant tasting API in an effort to match the taste with the results assessed by an electronic tongue. This approach has the advantage that taste can be improved using the electronic tongue without the need for several lengthy taste studies involving volunteers. Product efficacy can then be proven during clinical trials with the assurance that taste will not influence the results.

With the taste of a medication being one of the key attributes determining patient acceptability and compliance, as well as market acceptance, pharmaceutical companies must pay careful attention to the taste characteristics of the products they develop. Although this is important for all oral dosage forms, it is particularly important for user-friendly formulations that are savoured more intensely than conventional tablets and capsules.