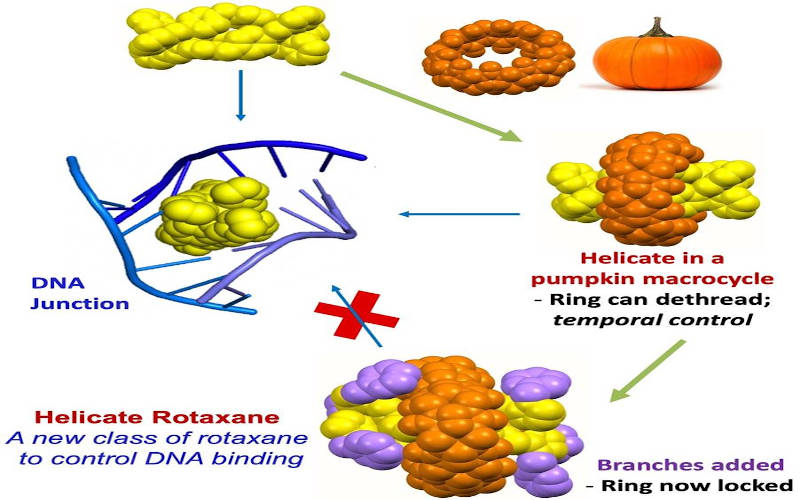 Researchers at the University of Birmingham have developed an approach to treating cancers and other diseases that uses a mechanically interlocked molecule as a “magic bullet”.

Called rotaxanes, the molecules are tiny nanoscale structures that resemble a dumbbell with a ring trapped around the central post. Scientists have been experimenting with rotaxanes based on thin, thread-like central posts for a number of years, but this design uses instead a much larger cylindrical-shaped supramolecular ‘helicate’ molecule, around 2 nm long and 1 nm wide, which can bind to Y-shaped junctions or forks in DNA and RNA.

These forks are created when DNA replicates and, in laboratory tests, the Birmingham researchers have reportedly shown when they bind to the junctions, the cylinder molecules are able to stop cancer cells, bacteria and viruses from reproducing.

To gain control over that binding, the team from the University’s Schools of Chemistry and Biosciences, collaborated with researchers in Wuhan, in China, and Marseille, in France, to solve the challenge of identifying a ring structure large enough to fit around this central cylinder molecule. They have now shown that a giant pumpkin-shaped molecule (called a cucurbit[10]uril) is able to host the cylinder. When the ring is present, the rotaxane molecule is unable to bind.

To prevent the cylinder from slipping out of the pumpkin-shaped ring, the researchers added branches to each end of the cylinder. They demonstrated the cylinder then becomes mechanically locked inside the ring and that they can use this to control the way the supramolecular cylinder interacts with RNA and DNA.

The results, published in Journal of the American Chemical Society, show not only how these complex molecules can be produced, but also how the number of branches can be used to regulate the speed at which the cylinder can escape from the pumpkin-shaped ring, from quickly to not at all. This allows temporal control of the fork-recognition and thus the biological activity.

Lead researcher, Professor Mike Hannon, said: “This is a really promising new approach that harnesses robust and proven chemistry in an entirely new way that has potential for targeted treatment of cancers and other diseases.

“Our approach is very different to leading cancer drugs which commonly affect all cells in the body, not just the cancer cells. The rotaxane molecule holds the promise that, by turning it on and off as required, it can specifically target and inhibit cancer cells with a high degree of accuracy.”