About a third of all epilepsy patients struggle to control their seizures with existing treatment options; Perampanel is being developed as a potential treatment

About a third of all epilepsy patients struggle to control their seizures with existing treatment options. There are two neurotransmitters known to play a role: γ-aminobutyric acid, or GABA, and glutamate. Most of the existing antiepileptics work by enhancing the neurotransmission of GABA in the brain, but glutamate has been less targeted. Perampanel is a new agent being developed as a potential treatment for epilepsy by Eisai.1 It acts as an antagonist of one of the glutamate receptors, AMPA, which plays an important role in the pathophysiology of epilepsy. 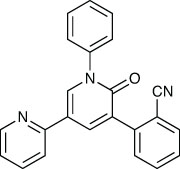 In a randomised, double blind, placebo-controlled Phase II study in patients with refractory partial onset seizures, subjects were given either 0.5mg of the drug twice a day or 1mg once a day, and the dose was titrated up by 1mg at two-weekly intervals to a maximum of 4mg/day.2 In a second, similar trial, subjects were given 2mg once a day, and again titrated up at two-weekly intervals, this time in 2mg increments up to 12mg/day.3 Adverse events included somnolence, dizziness and balance disturbances; 32.6% of treated patients were affected, compared with 27.8% of the placebo groups.

In one of several Phase III trials, 389 therapy-resistant patients with partial onset seizures were randomised to once-daily oral doses of 8 or 12mg perampanel or placebo.4 There was a significant difference in the median percentage change in seizure frequency with both doses of the drug compared with placebo although, curiously, the higher dose appears to have lower efficacy. The adverse effects seen in at least 10% of any treatment group were dizziness, fatigue, headache and somnolence. These and similar results from two companion Phase III studies,5 have led to Eisai filing for regulatory approval for the drug.