Making the most suitable choice

The primary function of cleanroom garments is to protect the product under manufacture from contamination, but the safety and general welfare of the wearer must also be taken into account. Considerations should include the material, durability, protection against liquid spills and other contamination, seam construction, closures and fastenings, comfort and packaging.

Not all single-use disposable garments on the market are suitable for use in all controlled or critical environments. Richard Bryant, from cleanroom consumables supplier Nitritex, identifies exactly what to look for.

The US Institute of Environmental Sciences and Technology (IEST), via its Contamination Control Division, has issued a Recommended Practice1 (IEST-RP-CC003.4) that gives guidance to cleanroom operators and garment manufacturers alike. The Recommended Practice goes into many facets of cleanroom garments and their design and use, and is a good starting point for evaluating their suitability for use in any grade of cleanroom.

Although IEST-RP-CC003.4 is primarily aimed at defining the requirements for reusable garments, it also includes those for single-use clothing.

While the primary function of cleanroom garments is to protect the product under manufacture from contamination, the cleanroom operator also needs to take into account the safety and general welfare of the wearer. If the cleanroom is used for manufacturing cytotoxic pharmaceuticals or involves the use of other hazardous substances, the cleanroom garments provided for use must also offer the wearer protection. In Europe, the requirements for the level of protection given by any garment are well defined by the European Personal Protective Equipment (PPE) Directive2 and any suitable garments should carry the European CE mark. 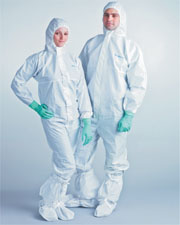 Cleanroom garments need to look and feel good when worn

The Recommended Practice and the Regulations really define the technical aspects of cleanroom garments, but they still need to look and feel good when worn. So when choosing a garment there are many pointers that can be used, some objective and others subjective.

The potential buyer should start by examining the technical specification, looking for conformance to performance standards, paying attention to those aspects that are most important to their own cleanroom, and then look for the little extras that make a difference to the wearer.

There are five key issues to consider before making the choice.

The material of any garments used in a cleanroom should have the following properties:

Cleanroom garments are designed to stop particulates emanating from the wearer from entering the atmosphere. They would be self-defeating if they then generated contamination themselves. The linting of cleanroom garments is measured and classified using the Helmke Drum test method described in IEST RP CC003.4.

Protection against liquid spills and other contamination

If chemical spillages or splashes are a concern in the cleanroom it is important that the fabric has been tested to ensure that it affords the necessary level of protection. Again, the thing to look for is a CE mark and the wording “Type 6”8 for full body coverage garments such as coveralls, or “Type PB[6]” for partial body protection garments, such as over-boots, over-sleeves or lab coats. Those labels indicate that the fabric has been tested against a number of chemicals for repellency and penetration using test standard EN ISO 65309 (or its predecessor EN 36810).

Good cleanroom garments are designed and manufactured to keep particulates in, protecting the products under manufacture in the cleanroom from contamination. In this respect there is no difference between re-usable and single-use disposable garments. When selecting a single-use garment be sure to look for fully enclosed, bound seams, as recommended by IEST-RP-CC003.4. Any CE-marked PPE garment will also have undergone a seam strength test in accordance with EN ISO 13935-2.11/sup> 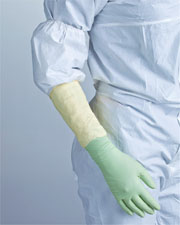 Wrist and elbow openings should feature a close and secure fit

For comfort, appearance and most importantly to prevent contamination, ankles and cuffs of coveralls and wrist and elbow openings of sleeve covers should feature quality elastic to create a close and secure fit. For additional comfort and to remove an entrapment point for particulates the elastics should be fully enclosed within the hem of the opening.

Zips used in a coverall must be of good quality – ensuring reliability and preventing inward leakage. As zips form a perfect trap for particulates they should be covered with a material flap that can be fastened down with a full length adhesive strip (short lengths of adhesive strips and hook and loop fasteners are as bad as zips at collecting particulates). The flap should preferably be of double thickness to conceal material edges within the body of the garment. The presence of a flap over the zip has the added advantage that it adds a seal for the protection of the wearer against exposure to liquids and inward leakage of powders.

Disposable garments should be generously cut to aid donning and doffing yet remain a good fit because ill-fitting and uncomfortable garments do not encourage maximum wearer efficiency. Small features can make a real difference to both comfort and protection:

To prevent cleanroom contamination, all garments must be double-bagged in non-particulating pouches that can be swabbed with isopropyl alcohol without removing the labelling. The contents of each carton should be packed in a PE liner to allow the disposal of the cardboard carton prior to entry into the changing areas.

All these features are now incorporated in the BioClean-D range of non-sterile and sterile single-use disposable garments as standard.

2. 89/686/EEC, Council Directive on the approximation of the laws of the Member States relating to personal protective equipment, 21 December 1989, as amended

4. EN ISO 7854:1997, Rubber- or plastics-coated fabrics. Determination of resistance to damage by flexing