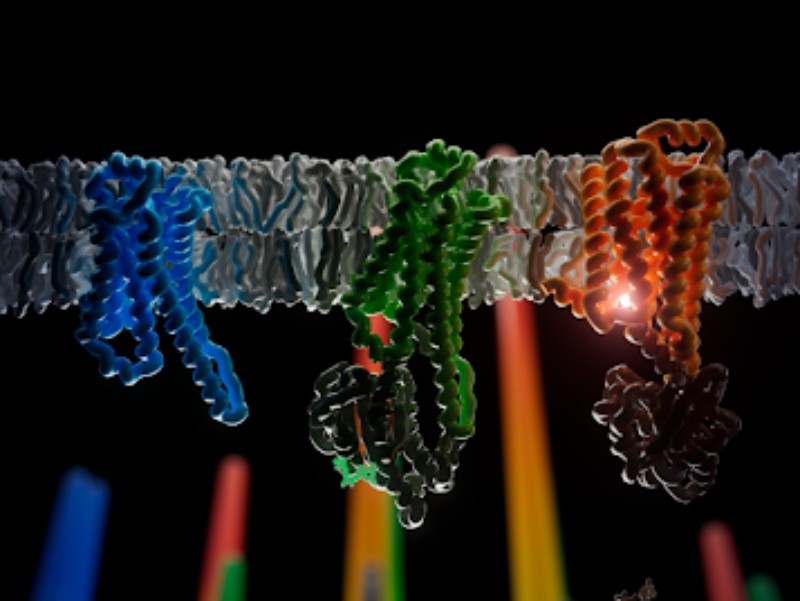 In this publication, the authors demonstrate how native MS can be used to investigate the pharmacology of GPCRs using β1AR as a model system. Being able to combine the sensitivity and near atomic mass resolution of the mass spectrometer, whilst preserving the receptor-G protein interactions, allowed the authors to monitor, with high sensitivity, the full spectrum of receptor pharmacology in vitro. Due to mass differences between different G proteins, the authors were also able to distinguish if a ligand is able to promote biased signalling towards a specific pathway.

The authors also discovered an endogenous zinc molecule associated with the receptor. This cation was shown to be a positive allosteric modulator of β1AR and demonstrates the potential for native MS to uncover novel insights that may be important for drug discovery. As an example, the regulation of zinc binding or mimicking its mechanism with a small molecule may provide a new avenue for modulating the kinetics or signalling of β1AR for therapeutic purposes.

These examples highlight two key benefits of utilizing native MS within drug discovery, namely: reconnecting the two fundamental drivers of pharmacology, binding and function; and interrogation of a native ecosystem with high precision.

Professor Dame Carol Robinson, Co-Founder of OMass Therapeutics and Chair of the Scientific Advisory Board said: “Our findings demonstrate that native MS can be used to reconnect the two fundamental drivers of pharmacology, binding and function. From a practical viewpoint, GPCRs had represented a major challenge for native MS. Overcoming these difficulties has allowed us to monitor attenuated G-protein coupling, driven by a wide range of ligands, highlighting the sensitivity and robustness of our approach."

We believe our native MS platform, as demonstrated with this latest publication, opens new possibilities to develop drugs against new GPCR targets, as well as other target classes such as solute carriers and complex-bound proteins

Robinson added: "I am also delighted that despite the fact that β1AR is a well-studied receptor, we were able to find a previously unknown endogenous zinc molecule associated with the receptor, which could have implications for the design of new allosteric modulators.”

Originally spun out of Oxford University, OMass has commercialised Professor Dame Carol Robinson’s research in native MS to develop its proprietary drug discovery platform, OdyssION. The platform integrates novel biochemistry techniques, next-generation native mass spectrometry, and custom chemistry, to allow for the interrogation of protein interactions in its native ecosystem while avoiding the confounding complexity of the cell.

This latest publication demonstrates some of the key benefits that OMass’ OdyssION platform offers in the search for new drugs against inadequately drugged or previously intractable targets. OMass is advancing a pipeline of small molecule therapeutics in rare diseases and immunological conditions that target GPCRs, solute carriers and complex-bound proteins.

Co-author Ali Jazayeri PhD, Chief Scientific Officer of OMass added: “GPCRs represent one of the most important target class of proteins for drug discovery, with more than 30% of clinically marketed drugs active against this receptor family. But, despite their prevalence as therapeutic targets, challenges remain in drugging these receptors."

Jazayeri continued: “We believe our native MS platform, as demonstrated with this latest publication, opens new possibilities to develop drugs against new GPCR targets, as well as other target classes such as solute carriers and complex-bound proteins.”