RH and its effect on drug attributes

Water's relationship to APIs is complex and can spell disaster for some drug formulations. Andrew Parker, Molecular Profiles, and Michael Leane, Bristol-Myers Squibb, look at the need to control relative humidity during various production processes

Humidity can be expressed as an absolute, specific or relative value. In the pharmaceutical community, the latter is generally used when controlling humidity; for example, either in stress stability studies performed to ICH conditions (e.g. 25°C/75% RH accelerated storage or 25°C/60% RH real time condition); or a manufacturing process step such as dry blending.

RH can be expressed as the ratio of the vapour partial pressure of the air to the saturation vapour partial pressure of the air at the actual dry bulb temperature. Hence, there is a different amount of water vapour per unit volume at, for example, 50% RH at 15°C compared with 25°C. Even over such a small temperature difference, the amount of water the air can hold increases by a factor of 1.8. Thus, even small differences in temperature can dramatically affect humidity sensitive processes.

In pharmaceutical manufacture, the need to control humidity may not be just to ensure stability of the API and prevent any degradation due to hydrolysis, for example, but also to ensure that quality drug products with respect to other critical quality attributes1 are produced.

For example, in the manufacture of dry powder inhalation formulations (DPIs) the exposure to moisture both during production and in the final device needs to be controlled and minimised. The presence of water can have a dramatic effect on the aerosolisation of the API upon inhalation by a patient due to the potential formation of capillary bridges.2 These can be caused by physically adsorbed moisture present on the surface of the API and carrier excipients that modifies their interactions.

The resultant effect of these capillary bridges is to lower the fine particle mass that can be recovered from the formulation, which has a dramatic and adverse effect on delivered therapeutic dose to the patient (or mass recovered from impactor plates if performing in vitro testing). Consequently, desiccants are often used in the inhaler device as part of a strategy to limit moisture to a very low level.

The manufacture of effervescent tablets requires special conditions and methods because effervescence is produced by the reaction (in water) of acids and bases producing carbon dioxide. While water can be used during effervescent tablet manufacture – in granulation steps, for example – the acid and base components are granulated separately and the granulation steps must be precisely timed and ingredients mixed thoroughly to distribute the binder solution evenly in the blend. The granulation is then rapidly moved into drying ovens to remove the water.

With respect to manufacturing drug products, understanding the effect of humidity on both APIs and excipients is fundamental to achieving process steps that generate reproducible outputs – such as blend homogeneity, granule size, granule hardness and flowability – batch after batch for non-continuous manufacturing operations.

Control of the humidity to a particular acceptable RH window as a critical process parameter is often required to ensure a consistent drug product is achieved. For example, in recent work published by the authors,5 an API was found to have unusual properties with respect to its exposure to small variations in RH. The work revealed a reversible moisture sorption event and single-crystal analysis indicated that these observations were due to the formation of a non-stoichiometric channel hydrate. This effect was reproducible on repeated cycles, suggesting that the material’s structural integrity was not compromised because of the interconversion process. 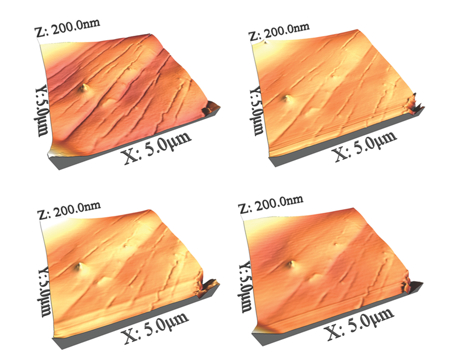 The reversible morphology changes observed in the EAFM occurred over a narrow RH range of 50%–60% RH, manifested by a reduction in roughness and the disappearance of cracks in the surface of the API material at the higher humidity; the latter re-appeared at exactly the same location upon the reduction of humidity.

Changes in unit cell dimensions with variation in RH are not unusual with channel hydrates; but concomitant, completely reversible surface morphology changes have not been widely reported. Since the surface morphology has a disproportionate effect on how material behaves physically during process operations such as blending, powder dispersion and compaction, a lack of control of RH during processing, especially given the ambient nature of the transition point, could lead to heterogeneous outputs during granulation and tableting steps, for example.

More generally, there are different mechanisms by which a material can interact with water suspended in the air. These include surface adsorption, which can affect surface properties such as flow and agglomeration as noted above. Another is deliquescence, where the uptake of water can literally dissolve material at the surface, assuming some level of water solubility. This can then enable water to enter the bulk of the solid which can cause further changes, such as formation of hydrates.

A complicating factor when assessing the potential impact of RH during drug product manufacture is that it is highly variable depending on the relative hydrophilicity and hydrophobicities of the API and excipients in the formulation and their relative compositional amounts. This level of hydrophilicity is determined by a combination of properties at the molecular level such as polarity, molecular structure, hydrogen bonding patterns, crystal packing and properties at the material level such as roughness, habit and potential to form capillary bridges.

The overall uptake of moisture at a particular RH for a formulation is affected by (a) the pressure gradient between the vapour pressure of water in the atmosphere over the sorbed moisture layer of the drug substance or excipient, (b) temperature, (c) the surface area of solid drug/excipent exposed to the water vapour, (d) the velocity of moist air’s movement, and (e) an interaction constant that is dependent on the combination of molecular and material properties of the API/excipients as described above.6

The impact of RH on the drug product attributes is by no means a new area of awareness. Reports from several decades ago note the influence of RH on drug product properties. For example, Rhodes et al7 published work in the mid-1970s where they investigated direct compression tablets containing different disintegrants, magnesium stearate as a lubricant and dibasic calcium phosphate dihydrate as the matrix. These tablets were stored for 30 days at 23°C/75% RH, 45°C/75% RH and 65°C/40% RH.

While there were no changes in the physical dimension or hardness of the tablet, there were significant differences and variation in the dissolution. In some cases, the changes were so substantial as to indicate the possibility of significant changes in the bioavailability of drugs formulated in such systems. 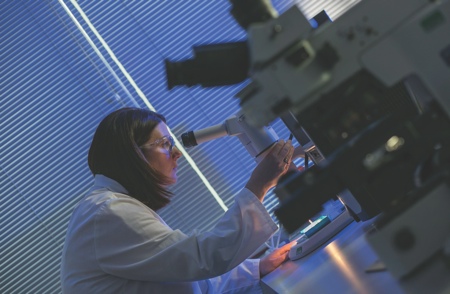 Exposure of materials, and in particular polymers, to high RH can have a plasticising effect on the solid state properties of the material. Polymers are often used to create coatings that can control and modify the release rate of a drug from a product if applied as a barrier, or used to solubilise the API (especially when the API is poorly water soluble) and create a solid solution/solid dispersion that can increase the solubility and hence bioavailability of the drug.

An increase in water content of an amorphous polymer usually leads to a reduction in the glass transition temperature (Tg). This often affects the stability of that material. For example, if a drug is amorphously distributed within the polymer matrix as a solid solution, a reduction of Tg may lead to increased mobility of the drug resulting in an earlier onset of drug crystallisation (this is without consideration of any thermodynamic parameters or the fragility of the amorphous system) and hence a reduction in API solubility and bioavailability.

Exposure of materials, and in particular polymers, to high RH can have a plasticising effect on the solid state properties of the material

Indeed, researchers8,9 are currently looking to understand, model and predict kinetic stability of solid solutions used to create drug compositions when these materials are exposed to different RH and temperatures. Achieving this could enable further analytical evidence to be presented to regulatory bodies to support justification of shelf life of the pharma product containing spray dried or hot melt extruded solid solution material, based on a kinetic model that describes crystallisation as a function of RH.

Plasticisation may also lead to material rearrangement that can change the morphology and behaviour of a material. A lack of control of RH during processing can also cause swelling or gelling of a polymer when used as coating (depending on the application method) that may be detrimental to the product performance and dissolution profile between batches.

As can be seen through this brief review, a lack of control of RH can affect detrimentally chemical, physical and material properties at all points during processing – from API manufacture to tablet compaction – and in the final product too, including the long term, solid state stability. A number of industries face the challenge of determining relationships between manufacturing steps and RH and learnings from further afield should be considered with regard to best practice strategies to control and obviate the impact of RH, and the temperature variations that affect RH, during pharmaceutical manufacture.