Robots make sure there isn’t a screw loose… 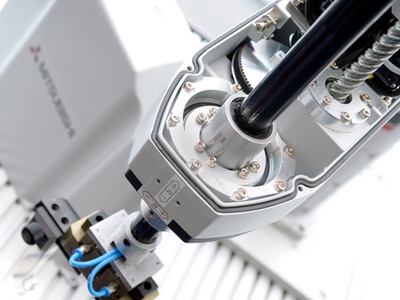 New production line for customers where robots and automation are combined. Image courtesy of Mitsubishi Electric

When working towards optimising production efficiency, the worst case scenario for the manufacturer is for an assembly to reach testing with missing parts or inconsistent screw torque and therefore fail the test procedure.

In case of a failure the assembly would have to be disassembled and examined as well as the cause of failure investigated, then rectified. All of which is time consuming and costly.

To avoid this scenario, the product being assembled has been designed specifically so it can be manufactured and tested using a combination of robots, automation and people.

At the start of the line some of the initial parts are positioned on a pallet by human operators using a pick-to-light guided operator bin system and cameras to ensure correct parts are picked and positioned.

Screwing the parts down and adding O rings, lubricant and additional small components is then carried out by a pair of Mitsubishi Electric articulated arm robots working in tandem.

Robots are ideal for these procedures simply because they are faster and more consistent with this type of operation.

The robots are Mitsubishi Electric’s popular MELFA Series units, offering extended articulation, dynamic movement and fast cycle times. These characteristics are combined with a class leading degree of accuracy and repeatability, ensuring the highest levels of productivity can be achieved.

An important feature for the integrator is the modular nature of the control components. The robot controllers, for example, are mounted directly on the same physical backplane as the Q series PLC that runs the entire production line.

This not only reduces purchase costs for the hardware, but also saves space and simplifies integration and commissioning work.

The production line was designed and installed by TQC using a complete package of components and software from Mitsubishi Electric including drives, HMIs, networking and operational software in addition to the robots and PLCs.

Mark Jones, TQC Sales Director said: “The cross platform way of programming and the ease of integration between hardware and software make it simple to develop even for quite complex systems. This enables us to deliver projects quickly and control costs more effectively.”

The customer is also reaping the benefits of an integrated OEE system installed on the line, with live performance dashboards displayed on large monitors to give operators real-time data about the line efficiency.

With this information, they can easily see when line efficiency is dropping and take action to correct it. Moreover, it is enabling continuous improvement of the line, by recording and showing the immediate effect of any pro-active changes that are made.

Steve Kirby, the Mitsubishi Electric Sales Manager responsible for the project, said: “The robots have replaced much of what would have traditionally been elements of ‘fixed automation’ in this project. Because they can multitask so effectively, from positioning screwdrivers to fitting small delicate parts and even passing assemblies to each other, a number of different models of the end product can be manufactured on this line.

“This flexibility is not only space efficient, but also makes the production facility itself more responsive, both of which contribute significantly to the bottom line. Combined with the OEE visualisation, the Mitsubishi Electric products have made a huge contribution towards improving efficiency, quality, productivity and resource optimisation.”