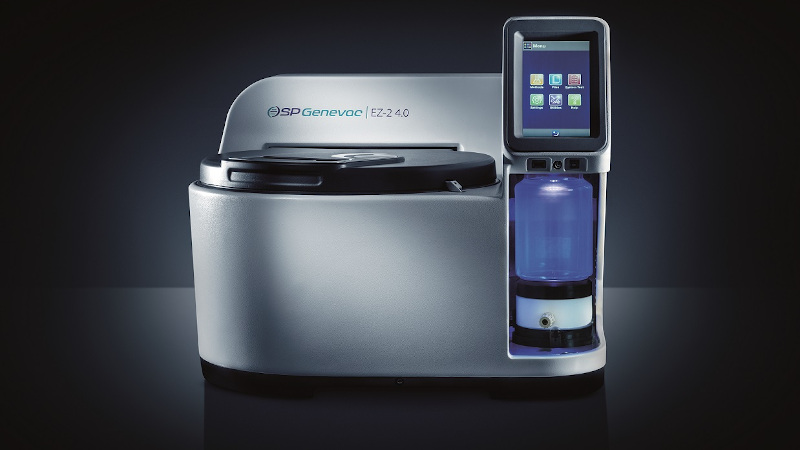 SP Industries (SP) has announced the launch of its Genevac EZ-2 4.0 Benchtop Evaporator series for the removal of commonly-used solvents and acids. The series is reportedly is capable of drying, concentrating, lyophilising – to a ‘fluffy’ powder - and producing crystals. The centrifugal evaporator is also operable by less experienced users, the company says. Operators can load, set and walk away without any need for specialised training.

The company has redesigned its EZ-2 series based on advances in evaporation science and feedback from bench scientists. To support performance and routine use, the chemically resistant, glass SpeedTrap condenser jar is now located at the front for visibility, and simple removal and replacement. A touchscreen interface enables ‘press-and-go’ operation with monitoring of operational parameters, more pre-set methods for frequently used protocols, a methods guide, and recording of all run data. High power lamps and software improvements enhance overall performance for faster evaporation rates.

The updated evaporator also offers greater versatility for additional applications. With EXALT technology, crystallisation studies such as polymorph screening can be conducted. In addition, by preventing any vapor from escaping, the SpeedTrap reportedly enables the device to be used without a fume hood.

The device also been redesigned to minimise its environmental impact, with low global warming potential (GWP) refrigerant, a standby mode to help save energy, and reduced use of plastic throughout. The packaging is also recyclable.

Three models, with HCl compatible and IGP (Inert Gas Purge) options, are available, aiming to ensure any solvent and application can be accommodated.

“Our new EZ-2.0 4.0 evaporator has a modern design and an intuitive touch screen and represents a major step forward in evaporation technology. In addition to its multiple new features, many of our proven patented technologies are built in to protect valuable samples and ensure powerful evaporation in a highly compact footprint,” Ian Whitehall, CMO at SP said. “The enhancements in our very latest centrifugal evaporator offering are all aimed at helping our customers accelerate breakthroughs in their scientific research.”