Scientists have doubled the number of known genetic links to osteoarthritis, opening up treatment potential 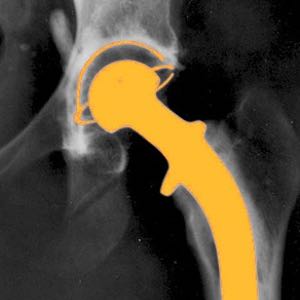 Replacement of the left hip joint after damage due to osteoarthritis.

In the largest genetic study of osteoarthritis to date, scientists have uncovered 52 new genetic changes linked to the disease, which doubles the number of genetic regions associated with it. The findings pave the way for new medicines and adjustments to existing drugs

Scientists at the Wellcome Sanger Institute, GSK and their collaborators analysed the genomes of over 77,000 people with osteoarthritis and over 370,000 healthy people. Of the genes identified from this sample, ten were highlighted as targets of existing drugs. Although some were for forms of osteoarthritis, some came from unexpected drugs such as; LCL-161, a cancer drug.

Commenting on the findings, Professor Eleftheria Zeggini, previously from the Wellcome Sanger Institute and now based at Helmholtz Zentrum München in Germany, said: “Osteoarthritis is a very common, disabling disease with no cure. We have conducted the largest study of osteoarthritis to date and found over 50 new genetic changes that increase the risk of developing osteoarthritis. This is a major step forward in developing treatments to help the millions of people suffering from the disease.”

Sanger is a large genome centre and the institute’s research findings, generated through its own research programmes and through its leading role in international consortia, are used in studies for diagnostic and treatment research. The osteoarthritis research used data from the UK Biobank resource and the arcOGEN study. The team studied many different types of osteoarthritis, including cases in the knee and hip joints.

In order to determine genes responsible, the team incorporated additional functional genomic data and analysed gene activity by measuring gene expression down to the protein level.

The team also integrated genetic and proteomic data on tissue taken from patients undergoing joint replacement surgery. By incorporating many different data sets, scientists were able to identify which genes were likely to be causal for osteoarthritis.