Polymorphism studies should be carried out as early as possible in the drug development process to demonstrate that each polymorph is stable and reproducible. The traditional methods for observing polymorphism, such as crystallography, microscopy, Raman and thermal analysis in solid form materials, remain unchanged but in terms of throughput have recently allowed a far more efficient approach to be adopted.

Polymorphism is an aspect of solid-state drugs that can throw up problems if ignored but can offer benefits if tackled early. Dr Tony Flinn, ceo, and Dr Jules Northen, research manager, Onyx Scientific, review the integration of solid-state development within traditional process development of new drugs

The US Food and Drug Administration (FDA) requires that all companies register the polymorphic structure of any new drug. Moreover, manufacturers need to demonstrate that each polymorph is stable and can be reliably reproduced. To show equivalence with existing drug substances, it is a requirement to show that the polymorph (and hence other properties) is equivalent to that already on the market. Guidance documents have been developed that have been co-ordinated through the International Conference on Harmonisation (ICH) to improve international consistency.

Regulatory authorities begin to take an interest in the solid-state form of a drug when the Investigational New Drug Application (INDA in the US) is submitted. Clearly polymorphism studies should have been initiated before then.

Many small pharmaceutical companies do not intend taking their drug candidates all the way to commercialisation themselves due to the enormous costs involved, but to seek to out-license at an earlier stage. This arises because of the considerable increase in costs as a drug moves through the clinic.

Part of the package to sell to Big Pharma typically includes a manufacturing process used to produce toxicological or Phase I material. If a polymorph screen is also included then the package is certainly stronger and the licensor can expect a further premium.

During pre-clinical development, the quantity of an Active Pharmaceutical Ingredient (API) available for studies is usually very low. Screening a wide variety of solvents and conditions needs to be conducted for that reason on a very small scale. Systems that can handle multiple experiments at the milligram scale are best. For example, at Onyx Scientific, an automated system handles 96 well plate formats and conducts experiments at 0.5–2mg scale. Thus the total amount of API used for an initial screen is a modest 50–200mg.

The need for a well defined solid form of an API when progressing through the development pipeline is a subject that has received much attention over recent years and the techniques and practices for screening and testing for such forms have improved in line with industry expectations.

An API is usually an organic chemical that often is soluble only in organic solvents and barely soluble or immiscible in water. To be successful, this new drug substance must be absorbed and then transported in the body to the site of action if it is to work as a drug. The API might be capable of forming crystalline salts, which are usually more soluble in aqueous environments. In this case it is desirable during early development to screen a wide range of different salt forms to arrive at the one with the best properties. This is often the first step in defining the solid form of a new API.

Each salt form will have its own range of different polymorphic forms and the polymorphs might have quite different properties. Some compounds will have many forms while others may have only a few. After the salt is selected, the desired polymorph is then chosen and the two related properties are optimised together. Occasionally, the salt is amorphous and cannot be crystallised or maintained as an amorphous material. This might be the best option but it is a rare event indeed.

Techniques for screening have advanced in recent years, with automated methods allowing larger numbers of conditions to be covered in relatively short spaces of time. Moreover, techniques using smaller amounts of reagents and reactants mean that a lot of information can be generated from a small amount of API.

A diverse range of conditions can be employed to find a large number of potential polymorphs. High Throughput Screening and analysis is becoming more routine, so that the preferred product form can be found earlier in development. The cost of doing such screening is falling, which means it can be done earlier and the net effect is a cheaper overall development process. If a new form is found late in development, at Phase III for example, then a lot of the earlier work will need to be repeated and the corresponding costs increase considerably. The ideal scenario is shown in Figure 1.

The traditional methods for observing polymorphism, such as crystallography, microscopy, Raman and thermal analysis in solid form materials, remain unchanged but in terms of throughput have recently allowed a far more efficient approach to be adopted.

Crystallography employs two main techniques. For rapid analysis X-Ray Powder Diffraction is used. This gives a pattern of peaks, each corresponding to different planes in the crystal. Different polymorphs show different patterns. It is possible to quantify known polymorphs in a mixture using Powder X-Ray Diffraction and analysis can be done automatically on multiple samples.

The gold standard to determine structure has always been single crystal X-Ray analysis. This needs primarily one crystal form and suitable crystals, which may or may not be available. Figure 3 shows the working part of an X-Ray Powder Diffractometer (PANalytical) used at Onyx Scientific. 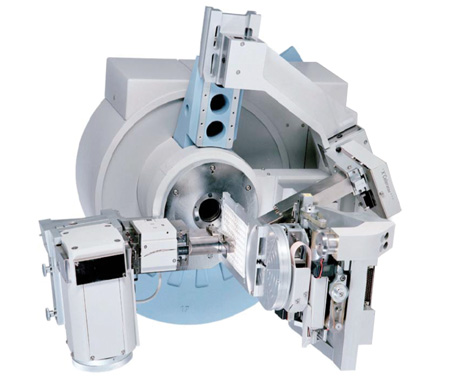 Raman spectroscopy is similar to the well-known Infra Red Spectroscopy technique but in reflective mode and is another potentially rapid analysis method. The precise location of molecular vibrations in the electromagnetic spectrum is dependent on molecular location so different crystal forms have different environments and hence different fingerprints.

Like X-Ray Powder Diffraction, Raman Spectroscopy can be used in a quantitative mode. Thermal analysis includes such techniques as Differential Scanning Calorimetry (DSC), Thermogravimetric Analysis (TGA) and Dynamic Vapour Sorption (DVS). These techniques give invaluable information on structural form, purity and solvation or hydration. Microscopy allows visualisation of crystals during heating/cooling and enables videos to be made to aid understanding of thermal properties. Once potential forms are considered the thermal techniques and microscopy are used further to understand solid-state properties. 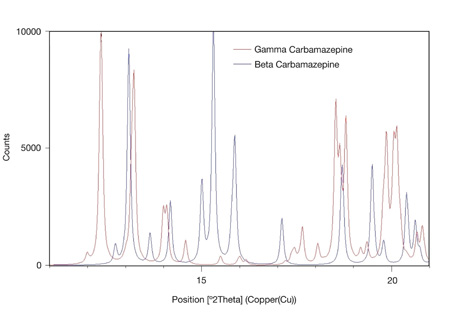 Figure 2: Two different polymorphic forms of the drug Carbamazepine overlapped to illustrate some differences in the XRPD spectrum

A greater range of companies are now actively considering and investigating the polymorphic tendencies of candidate drugs at an earlier stage, in part due to increased awareness and also due to the speed and efficiency that can be applied to such investigations.

In 1996, Abbott Laboratories launched Norvir on the market. The drug had cost the company in excess of US$200m to develop. Norvir was formulated as an encapsulated ethanol/water solution. In 1998, supplies of the drug were interrupted by the appearance of a new crystal form at a plant in the US and then at a plant in Italy. This new, more thermodynamically stable form had very different physical properties from the earlier material and Abbott was forced to withdraw the drug from sale. The new form failed dissolution tests and precipitated out within the capsules. While trying to recover the original polymorph, the company lost an estimated $250m in sales while the product was off the market. There is no doubt that many AIDS sufferers were not helped by the product’s absence.

What appeared to have happened was that a degradation product obtained during manufacturing had initiated the appearance of a second crystalline form, a second polymorph. This salutary tale shows how important it is to get the polymorphic structure right as early as possible and understand the conditions that cause deviations from the desired form.

It is well known that the longer and harder you study a particular candidate the greater the number of forms you are likely to find. It is. however, relatively clear that in most cases of early stage development, a few weeks is more than sufficient to provide an adequate insight into a compound’s tendency towards poly-morphism and lead to a viable pre-clinical and clinical study candidate (see the time line in Figure 1). The comprehensive all-encompassing study can be done later in development to cover all intellectual property angles.

Similarly, while not as prevalent as crystalline form development and screening, analytical advancement and more efficient approaches to screening have led to an increased interest in progression of the amorphous form. This is especially true where materials are highly insoluble and not viable in another solid form or salt version. As a consequence, solid form dispersions of amorphous materials within a polymer matrix are of great interest, where improvements in the detection of crystalline content and/or quantification of amorphous content within crystalline material have made such developments feasible, e.g. via the use of isothermal calorimetry, high sensitivity XRPD and solid state NMR.

Likewise, when it comes to scaling up the crystallisation of a given form, improvements to in-line process analytical testing and crystallisation control have helped to alleviate some of the unwanted issues that can often be encountered when scaling up crystallisations from the laboratory scale, such as late stage identification of a new and problematic polymorph. This, combined with a greater understanding of material behaviour and form(s) from early stage ‘pragmatic’ screening, will make for smoother progression of future drug candidates through development to bulk synthesis and ultimately production.

One further advantage of earlier solid-form optimisation work is that subsequent process development aimed at producing a particular form can be controlled and geared to that form. If mixtures of different forms are possible then without knowing it, problems may be introduced later in development. Much more control of the whole drug development process is therefore facilitated with the earlier adoption of suitable solid-state evaluation.

What is a polymorph?

Polymorphs are different crystalline forms of a chemical compound. They comprise the same chemical entity but are packed differently. It is believed that 50-80% of all Active Pharmaceutical Ingredients (APIs) exist in at least two polymorphic forms. In simple visual terms the following scheme shows how to envisage polymorphism. The API is shown as a rectangle, which can pack together in a crystal in different arrangements. The different forms can have different physical properties. 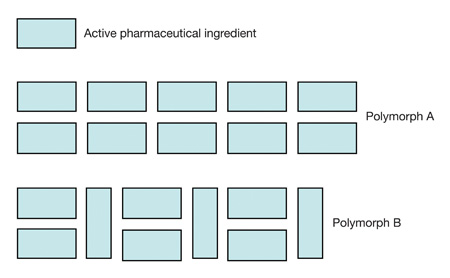 Polymorphs are different crystalline forms of a chemical compound