Many cancers result from the dysregulation of cellular processes, including apoptosis

This programmed cell death is one of the functions regulated by tumour suppressor P53; its counterpart, MDM2, or mouse double minute 2 homologue, promotes the degradation of P53.

If MDM2 is overexpressed, then too much P53 will be destroyed, allowing tumour cells to evade apoptosis. As a result, there is a lot of interest in drugs that target the MDM2-P53 process to restore the activity of P53, enabling apoptosis to occur correctly in tumour cells. 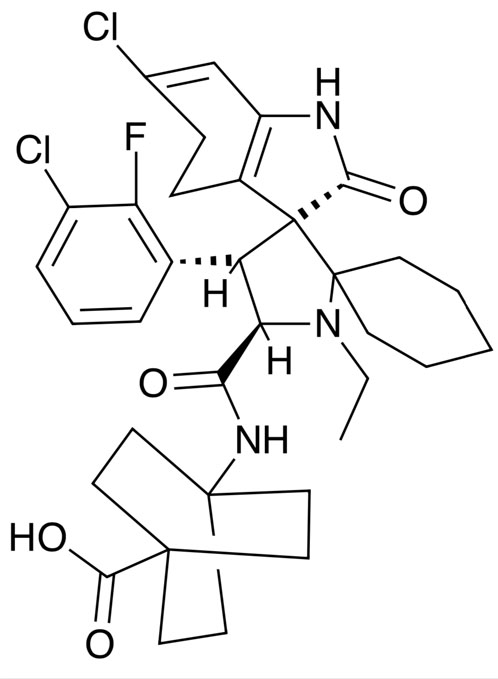 One such drug, alrizomadlin, is a potent inhibitor of MDM2 that’s being developed by Hong Kong biotech Ascentage Pharma as a potential treatment for both solid tumours and blood cancers. It also acts as a host immunomodulator, so it may be able to restore antitumour activity in patients who have failed immunotherapy treatment.

In a Phase I trial in patients with advanced liposarcoma and other solid tumours, subjects were given 100, 150 or 200 mg oral doses of alrizomadlin on alternate days for 21 days of a 28-day cycle.1

Two dose-limiting toxicities — thrombocytopenia and febrile neutropenia — were seen in the two patients given the highest dose. Fewer treatment-emergent adverse events were seen at 100 mg.

Of the 20 patients for whom efficacy could be evaluated, there was one partial response in liposarcoma, 12 patients had stable disease and the condition progressed in the remaining seven.

Subjects were given 150 mg oral doses of alrizomadlin every other day for 2 weeks, followed by a week off plus 200 mg of pembrolizumab by intravenous infusion on the first day of the 21-week cycle.

Common adverse events included nausea, thrombocytopenia, vomiting, fatigue and diarrhoea; in all, 11 patients discontinued because of adverse events. They concluded that the combination was well tolerated and that it might be able to restore antitumour effects in patients who have developed resistance to immunotherapy.