Phosphatidylinositol 3-kinase delta (PI3K[delta]) is commonly overexpressed in cancer cells. In particular, it plays a vital role in the proliferation and survival of haematologic cancers 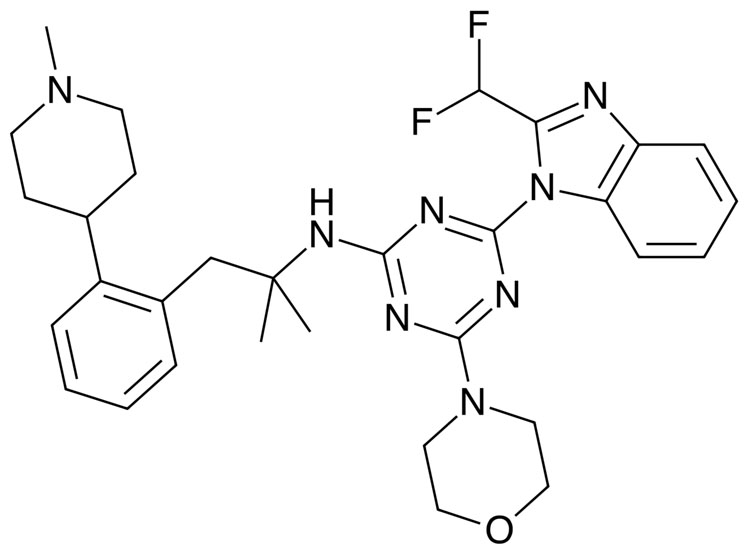 A selective inhibitor of this isoform, zandelisib, is being developed by MEI Pharma and Kyowa Kirin as a once-daily oral treatment for B-cell malignancies; it has been granted fast-track designation by the US FDA to treat relapsed or refractory follicular lymphoma.

This is the most common indolent lymphoma, representing about 20–30% of all non-Hodgkin lymphomas. It is most common in the elderly and can sometimes progress to diffuse large B-cell lymphoma, which is much more aggressive.

After a first-in-human trial confirmed pharmacologic activity and suggested a starting dose of 60 mg a day, 31 patients with relapsed or refractory follicular lymphoma, chronic lymphocytic leukaemia or small lymphocytic lymphoma were given 60, 120 or 180 mg of the drug once a day on 28-day cycles in a Phase Ib trial until disease progression or unacceptable toxicity occurred, with the response assessed after cycles 2 and 6.1,2

Of the 29 evaluable patients, the overall objective response rate was 83%, with 75% in follicular lymphoma. No dose limiting toxicities were reported and escalation above 180 mg did not happen because of the frequent responses observed at lower doses.

The most common adverse events were diarrhoea, fatigue, cough, rash and nasal congestion.

It has also been evaluated in combination with the oral BTK inhibitor zanubrutinib — as the combination may be able to overcome existing or acquired monotherapy resistance.3

There were no dose limiting toxicities in the first cohort and two in the second, one of which was able to resume treatment.

There were two complete and 14 partial responses in the 16 patients with indolent lymphomas, representing a 100% response rate in this group; there were no responses in aggressive B-cell lymphomas.

Adverse events included neutropenia and thrombocytopenia. The lower-dose schedule is being evaluated in expansion cohorts in follicular lymphoma and mantle cell lymphoma.

Numerous other trials are under way, including a Phase II study investigating it as a monotherapy for follicular and marginal zone lymphomas, and another in indolent B-cell non-Hodgkin lymphoma, lymphoplasmacytic lymproma and Waldenström’s macroglobulinaemia.