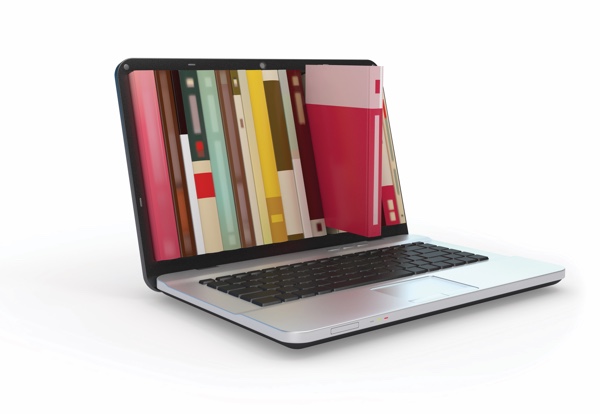 An accurate and good understanding of the contents of any pharmaceutical or biopharmaceutical helps to ensure both drug efficacy and patient safety. This is no revelation. In fact, this was recognised almost 200 years ago when the United States Pharmacopeia (USP) was formed, with the very aim of specifying the minimum level of critical quality attributes that should be controlled throughout the manufacture of drug substances (DS) and drug products (DP) and their shelf-life.

These attributes and respective acceptance criteria, as well as associated test methods, are described in the monograph of an article. When a test procedure is used in multiple monographs, the preferred option is to develop a General Chapter for this procedure, which is referenced in the various monographs. USP is believed to be the oldest continuously revised and published pharmacopoeia. Their “book” is the USP-National Formulary (USP-NF), which focuses on DS and DP for prescription and over-the-counter drugs, dietary supplements and ingredients, excipients and compounded DP. Ensuring that the almost 5000 monographs within the USP-NF today are correct, up-to-date and make use of the most appropriate and current existing technology involves the work of a large team comprising staff, regulatory agencies, committees, expert panels, the pharmaceutical industry and other stakeholders. In this article, we will explore the area of pharmacopoeial monograph modernisation, including thoughts and input from USP staff and industry experts, considering relevant and upcoming chromatographic and spectroscopic techniques.

Improved analytical methods and techniques are always in demand to ensure a full understanding of critical quality and performance attributes for pharmaceutical and biopharmaceutical products. Liquid chromatography techniques are widely used and are gaining more traction because of technical advancements and wider applicability, accounting for improved reliability, specificity, accuracy and environmental safety concerns.

In a broader sense, both HPLC and IC are essentially liquid chromatography techniques that cover a range of detector options and pressure limit; these techniques even adopt similar mathematical models and calculations to establish peak area and symmetry. However, the two techniques are quite different from each other in terms of the type of stationary phases, eluents, common detectors employed, etc. HPLC mostly utilises absorbance detectors to analyse the sample of interest, whereas IC relies on suppressed as well as non-suppressed conductivity detections for sample analysis. Another major difference between the two is the choice of eluents to examine the analytes of interest. For example, IC systems rarely use mobile phases containing organic solvents, whereas HPLC systems in most instances involve reversed phase eluents comprising organic solvents such as acetonitrile, methanol, etc. Despite the similarities and differences with HPLC, IC systems possess clear distinctions. For example, IC uses strong acids and bases as mobile phases, which are not at all good for HPLC systems on a long-term basis.

Any part of an IC system that is exposed to these mobile phases is designed with a special polymeric inert material, polyether ether ketone (PEEK), which can handle such caustic mobile phases. Additionally, modern IC systems can even make eluents automatically, allowing the spontaneous production of high purity IC eluents. This is made possible with precise control of the electric current applied to the electrolysis of water to generate hydroxide and hydronium ions. Eluent generation eliminates the need to manually prepare eluents from concentrated acids and bases. The only routine reagent then needed is deionised water. Consequently, the instrument pump seals and pistons only come into contact with deionised water instead of acids and bases, which can precipitate. This extends the lifetime of pump seals and pistons, and significantly reduces overall pump maintenance requirements.

During several decades, IC has been successfully adopted to analyse ionic species such as counterions, impurities, excipients and others in DP and DS.1 Consequently, the interest in IC applications is constantly growing. The benefits of selectivity, reproducibility, sensitivity and reliability that are critically needed for the assessment of DP and DS are increasingly being realised. Most frequently, the analytes examined by IC include active pharmaceutical ingredients (APIs) or DS, counterions (anions or cations) of APIs, impurities and degradants, excipients, simple sugars (such as monosaccharides), sialic acids, amino acids, antibiotics, glycans and others. Most of these analytes are detectable either via suppressed or non-suppressed conductivity.2–4 Other analytes may require ultraviolet (UV/Vis), pulsed amperometric detection (PAD), mass spectrometry (MS), fluorescence or inductively coupled plasma-MS (ICP-MS).

The constant developments in IC technology have expanded potential applications and increased adoption, which has not only been recognised by the pharma and biopharma industry, but also by key regulatory agencies around the world. An increasing number of monographs now adopt IC-based methods, including the recently proposed calcium acetate capsules, sodium fluoride oral solution and the zinc oxide family that were published in Pharmacopeial Forum. The procedures in General Chapter <345〉> Assay for Citric Acid/Citrate and Phosphate are ion chromatographic procedures. There are about 40 monographs referencing this chapter in USP-NF.

In the past 3 years, USP has added new general information chapters on IC and its applications — Chapter <1065> Ion Chromatography and recently revised <591> Zinc Determination — to include an IC procedure, illustrating the growing acceptance of these instrumental methods.5 Presently, there is an ongoing USP initiative to modernise individual monographs with modern techniques and procedures. The objective of this initiative is to modernise individual monographs by

This USP monograph modernisation initiative can be viewed simply using a Venn diagram (Figure 1) wherein the common processes are categorised into four major sections of a monograph: identification (indication of identity mainly for drug product), assay (indication of strength), organic impurities (indication of purity) and other (tests such as pH, performance tests, etc.).6 These major sections clearly illustrate the goals and expectations from the USP modernisation initiative. 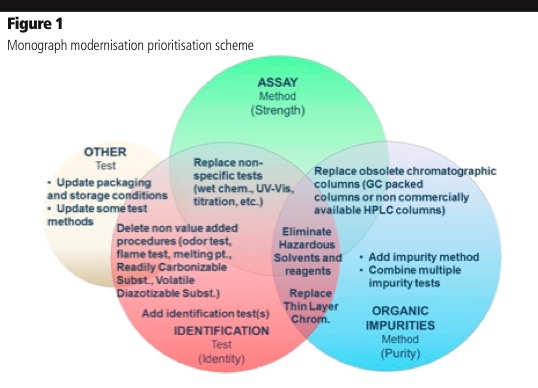 There are certain requirements or guidelines to consider when modernising these individual monographs, including (1) the compendium should contain only current as well as new monographs and general chapters in a timely manner, and all the monographs/general chapters that are no longer needed should be omitted, (2) monographs and general chapters should be modernised and/or revised to reflect the “state of the industry” practices and ensure the availability of all the relevant reference standards, and (3) the standards should be suitable for their intended use to ensure that all components are clear and complete. Additionally, all unnecessary tests should be removed, and the appropriate selection of reference standards should be facilitated.

The role of ion chromatography in monograph modernisation

In light of the USP modernisation initiative, we wanted to understand the pharma and biopharma segment’s response towards the adoption of such compendial methods. Additionally, we were also curious to know whether IC was considered to be a strong tool within the modernisation initiative, as well as the adoption of IC-focused compendial methods. Recently, we conducted a survey and the results indicated that 68% of respondents in the pharma and biopharma industry responded positively towards the related IC usage. The responses included either that they were currently using IC or are planning to use IC for their future needs (Figure 2). 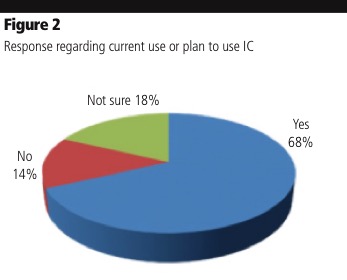 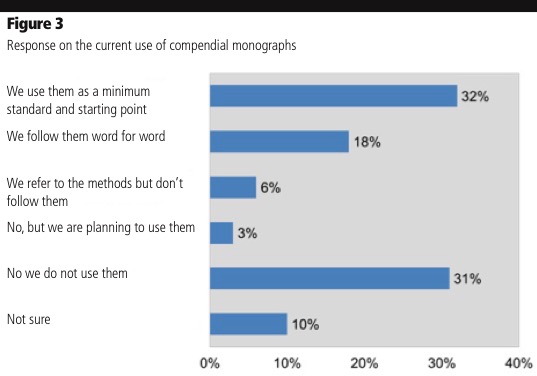 These findings indicate the strong need to modernise the monographs so that users can realise the technological advancements and related benefits that methods or procedures (such as IC) can offer to their sample analysis, as well as meeting analytical needs. In the direction of the modernisation initiative, IC has already been a well-established regulatory method to analyse anions and cations for pharmaceutical and biopharmaceutical relevant drug substances and drug products. Additionally, IC offers several benefits, including 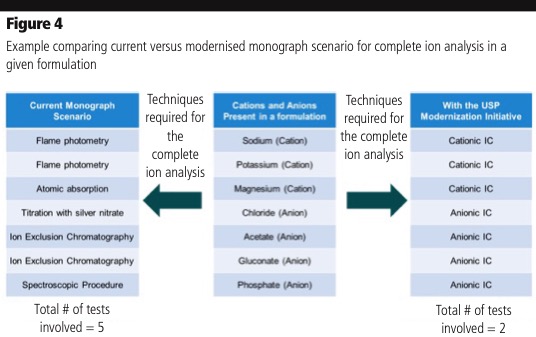 All of these benefits can play a significant role in the modernisation initiative and in future monograph simplification. For example, consider the analysis of a formulation sample containing a combination of sodium, potassium, magnesium, chloride, acetate, gluconate and phosphate ions (Figure 4). The analysis of the above set of ions would traditionally require separate techniques to quantify both cations and anions. Using the current monographs, flame photometry can analyse sodium and potassium; atomic absorption can analyse magnesium; chloride can be analysed via titration with silver nitrate; acetate and gluconate ions can be analysed via ion exclusion chromatography; and phosphate ions would require spectroscopic procedures (molybdate reaction). Thus, for all these ion analyses present in a single formulation, a total of five different techniques are recommended. However, all of the anions including chloride, acetate, gluconate and phosphate can be analysed via anionic IC in a single injection and all of the cations, namely sodium, potassium and magnesium, can be analysed together in a single run using cationic IC.

Thus, the incorporation of IC offers a great potential to reduce the number of tests from five to two and to significantly simplify any such monograph. Such opportunities not only offer analysts a significant reduction in the number of tests, but also introduce the reliability and reproducibility required in a modern GMP-compliant pharmaceutical laboratory, namely retention time reproducibility, time and cost savings, and an overall reduction in the laboratory inventory and related user training and system maintenance needs.

In summary, IC is well positioned to modernise pharmacopoeial methods. It offers great benefits in the diverse applications of the modern pharmaceutical and biopharmaceutical laboratory and in the development of methods for the DP and DS of the future.