Sonja Borchert, Philipp Süss and Rainer Wardenga, of Enzymicals, look at simple and robust up-scaling of a biocatalytic process

Applied enzyme catalysis (biocatalysis), nowadays an emerging field in 'white biotechnology', is considered to represent one of the key technology areas of the 21th century. In spite of the potential and importance of enzymes as catalysts in organic chemistry, the number of efficient industrially applied processes is still limited in comparison to 'classic' chemical or chemocatalytic syntheses.1 Despite its advantages and opportunities, such as high enantio-, diastereo-, regio-, and chemo-selectivity, the use of water as a solvent, and the potential to realise environmentally friendly processes,1 biocatalysis still faces several prejudices.2

Today, isolated enzymes can be obtained from commercial sources either in a crude or partially purified form and can be handled like any other chemical catalyst.2 The majority of commonly used enzyme preparations are available through chemical suppliers; so are the enzymes from Enzymicals.3,4

In this contribution we present a simple and robust process for the enzymatic desymmetrisation of dimethyl cyclohex-4-ene-cis-1,2-dicarboxylate. As catalysts the commercially available recombinant isoenzymes of pig liver esterase (PLE) were chosen.

High purity, reproducibility from batch to batch, uniform quality and selective access to the desired isoenzyme are the advantages of recombinant pig liver esterases over the classical preparation from animal tissue with varying isoenzyme mixtures.5,6

The commercially available isoenzymes from Enzymicals were investigated towards activity, selectivity, pH- and solvent-dependency for the desymmetrisation of dimethyl cyclohex-4-ene-cis-1,2-dicarboxylate (1, figure 1).

First, the isoenzymes were tested for activity on diester 1 via pH-shift due to acid formation. Strong differences in activity were found between the isoenzymes.7 ECS-PLE06 exhibits the highest activity for the substrate 1, referred to as 100% relative activity. ECS-PLE05 demonstrated a reduced activity of about 55%. The activities determined for ECS-PLE04 and 03 are significantly lower. The isoenzymes ECS-PLE01 and 02 showed hardly any activity towards conversion of 1.

Second, the enantioselectivity of the isoenzymes and thus the resulting synthetic potential was investigated with conversion experiments on a small scale.7 It turned out that ECS-PLE06 is not only the most active of the six isoenzymes on substrate 1, but also highly enantioselective for the formation of 2 (see figure 2). After a reaction time of 120 minutes, full conversion and an excellent enantiomeric excess of >99.5% ee was obtained. A slightly lower rate of conversion was determined for ECS-PLE05. Nevertheless, almost full conversion and excellent enantioselectivity of >99.5% ee was obtained after 120 minutes.

In a comparison experiment classical pig liver esterase (commercially available isoenzyme mixture) was applied. After 120 minutes only about 30% conversion and a lower enantiomeric excess of nearly 96% ee was obtained for the formation of 2. The result illustrates the high synthetic advantage of recombinant PLEs over the preparation from mammalian source. Furthermore the influence of water-miscible solvents was investigated, as these are known to alter the characteristics of the recombinant PLEs. However, no positive influence was observed.

The lower enantiomeric excess achieved with classical pig liver esterase can be explained, when investigating the other isoenzymes towards enantioselectivity for the desymmetrisation of 2 in detail: isoenzyme 03 hydrolyses the diester 1 forming the monoester as an almost racemic mixture (3% ee) with about 30% conversion after 120 minutes. The isoenzymes ECS-PLE01, 02 and 04 hardly showed any product formation. Depending on the isoenzyme composition of the classical PLE preparation, diminished synthetic performance and loss of enantioselectivity will occur, whereas different batches of the recombinant PLE isoenzyme are of equal quality, thus giving robust and easily reproducible results. 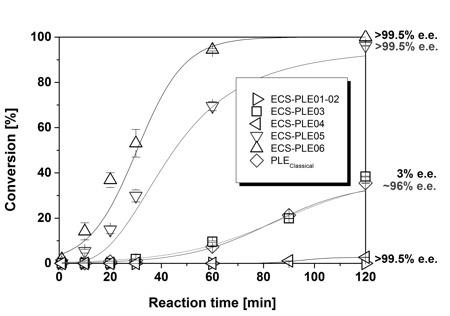 Additional experiments were conducted to determine efficient process conditions for the desymmetrisation of 1 catalysed by ECS-PLE06. In particular reaction temperature and pH were investigated. The reaction was run at 10, 25, 40 and 60°C respectively. We determined 40°C as the optimum reation temperature for the process,7 as the recombinant PLEs are less stable at >50°C.8 It is noteworthy that excellent enantioselectivity for the conversion of 1 into the monoester 2 was confirmed, regardless of the reaction temperature.7 This emphasises the robustness of the enzyme.

During the reaction the monoester 2, which is also an acid, is formed, thus lowering the pH of the aqueous solution. During the screening for enantioselectivity, the pH was kept stable by using higher concentrated buffer solution. As this approach is not suitable for reactions on preparative scale and especially later during scale-up (costs and limited salt solubility), the pH was adjusted during the reaction by external addition of base and a pH controller.

This method worked well on small scale (20-40 ml) at a substrate concentration of 80-100 mM: conversion of >99% was obtained after 2-4 hours.3 However, at the scale of 0.63 l a maximum conversion of 91% was obtained, even after a prolonged reaction time of eight hours. We assume, that due to the higher amount of NaOH for pH-adjustment on larger scale, local high pH-hot spots occur, which lead to a decrease in enzyme stability, local enzyme denaturation and loss of activity.

Alternative techniques for internal pH control were evaluated, e.g. inorganic acid regulators. Among these sodium hydrogen carbonate (NaHCO3) exhibits sufficient solubility in aqueous media and maintains an optimal pH slightly above 8. During the reaction it rapidly neutralizes the formed carboxylic acid 2. The formation of gaseous carbon dioxide was visualized via a bubble counter and allows reaction monitoring. With this technique optimal reaction conditions are easily maintained without any further addition of base or need for technical equipment (e.g. pH controller). So far the acid scavenger NaHCO3 was successfully applied at 200 mM substrate concentration at a reaction volume of 8.8 l giving the product 2 after four hours with excellent conversion (>99%) and an enantiomeric excess of >99.5% ee. The pH remained stable throughout the whole experiment. In total 0.27 kg enantiopure monoester 2 was isolated in high purity.

With sodium hydrogen carbonate as an internal pH control, a maximum space-time yield of 30.7 g/(l*h) was determined, which is a 5.6 fold increase compared with the best example with a classical pH-adjustment via external addition of a base solution.

This article illustrates very well the great potential and robustness of biocatalytic processes. In three steps we went from screening on mg-scale to production on kg-scale and observed perfect reproducibility throughout all stages (>99% conversion, >99.5% ee for 2). This is one benefit from the application of the recombinant isoenzyme as catalyst: uniformity. Furthermore the catalyst is not sensitive to water or oxygen and can be stored for months without loss of activity. 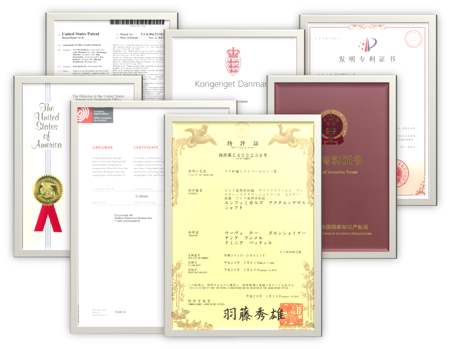 It is now time for chemistry and chemists to change attitude and to build a bridge between methods of classic chemistry and the new opportunities offered by biocatalysis. Enzymicals acts with an interdisciplinary team as an innovator in the development of resource efficient, sustainable, cost-effective and scalable chemo-biocatalytic routes.

Depending on the customer’­s demand, Enzymicals provides a CRAM-service for enzymes and chemicals, which includes the route scouting for the synthesis of desired compounds, feasibility studies, process development and production up to the kg-scale. The company also provides a steadily growing library of enzymes, with a unique selection of specialty enzymes, like the patented recombinant pig liver esterases (see figure 3) applied in the process described above. Furthermore our collection contains hydrolases, transferases, oxidases and lyases for the synthesis of tertiary alcohols, β-substituted alcohols (e.g. aminoalkohols), chiral amines and chiral lactones.

We believe that the ideal way to overcome the challenges of chemistry is to combine the best catalysts with an optimised chemistry and integrate processing aspects for effective solutions along the whole value chain.

We hope this article will encourage open-minded chemists to consider biocatalysis as a helpful synthetic additional tool and that it motivates them to collaborate with interdisciplinary teams.

3. For a selection of enzymes from Enzymicals AG see: www.enzymicals.com/Enzymicals_Enzymes_v011.pdf

4. As one selected example see: www.sigmaaldrich.com/catalog/product/sigma/91467