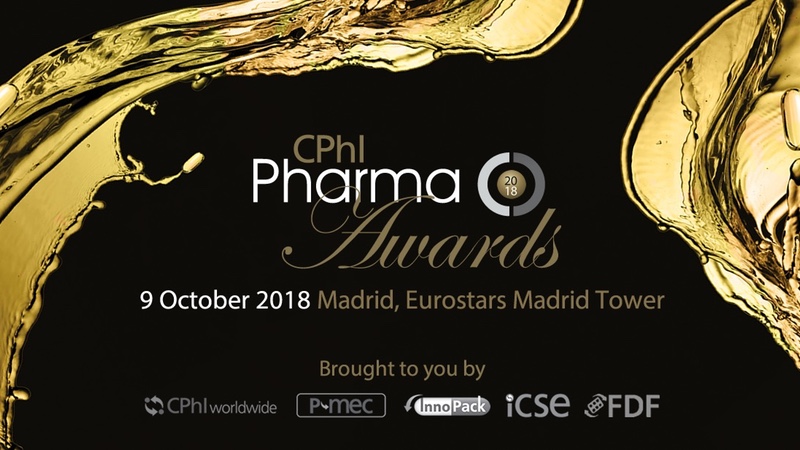 CPhI Worldwide, organised by UBM, has announced the winners of the prestigious 2018 CPhI Pharma Awards. The awards, in their fifteenth edition, welcomed 365 guests to celebrate outstanding achievements in pharma across 17 different categories.

The winner of the award for ‘API Development’ was Ipca Labs for Artemisinin, a new process development that lowers the cost of production to US$100 per kg. The ‘Formulation’ award was given to MiVital for its new bioavailability technology, which works by encapsulating lipophilic compounds, making them soluble in an aqueous environment.

Merck received the ‘Excipients’ prize for its Parteck MXP Excipient that increases the solubility of poorly soluble APIs, so that they can reach a supersaturated dissolution state.

The ‘Manufacturing Technology and Equipment’ award was given to AqVida for the AqVida filling line – a commercial-scale filling line with robotic arms that saves costs and reduces human interaction.

Merck received a second award for ‘Bioprocessing’ in recognition of its Simplification of Fed-Batch Processes Using Modified Amino Acids. This breakthrough allows for a single, neutral pH feed and results in a more efficient and stable process.

The prestigious ‘CEO of the Year’ award has been presented to Dr Laurent Levy, the founder and CEO of Nanobiotix who has propelled the company to the forefront of oncological nanomedicine development. Yet the commendations did not stop there with Nanobiotix receiving the award for ‘Pharma Company of the Year’.

The company is pioneering new approaches in cancer treatment and fast becoming the leading nanomedicine company.

Tornado Spectral Systems was successful in the ‘Analysis, Testing, and Quality Control’ category for the HyperFlux PRO Plus, which permits faster and more sensitive process measurements and enhances spectral throughput.

Nemera received the ‘Drug Delivery Devices’ prize for e-NOVELIAt he smart ophthalmic add-on - it assists in drug delivery and reminds patients when to take their dosage.

TECHNOFLEX won in the ‘Packaging’ category for its Dual-Mix bag that allows for quicker and safer drug reconstitution. In ‘Supply Chain, Logistics, and Distribution’ Systech International has been commended for its UniSecure – a supply chain innovation that uses packaging barcodes to create a digital e-fingerprint for product protection.

The ‘Contract Services and Outsourcing’ award was given to CatSci for the development of a novel bio-catalysed manufacturing route for a generic API, enabling accelerated drug development timelines and lower costs for pharma companies.

Scientist.com was chosen as the winner of the ‘Regulatory Procedures and Compliance’ award in recognition of its new regulatory and compliance framework, COMPLi.

Medical Brands & Vemedia was victorious in the ‘OTC’ category for its Excilor 2-in-1 Wart Treatment Device. This is a single streamlined device combining cryo technology and an acid based on TCA-Active.

In the ‘Patient Centricity’ category, SRS Life Sciences won thanks to the Unistraw Delivery System, a child focussed approach to pharmaceuticals and supplements delivery.

Qualit-e Cloud received the ‘IT, mHealth & Digitilisation’ award for its new web portal. This innovation enables pharmaceutical raw material producers to upload their quality documents and authorise customers and distributors to download.

Tara Dougal, Head of Content – Pharma at UBM, said: “This year has been a truly remarkable and record-breaking year for the pharmaceutical industry and this was definitely mirrored in the extremely high standard of entries at the CPhI Pharma Awards. In our 15th year, we have seen a staggering number of submissions across the pharmaceutical supply chain."

“The judges have meticulously assessed each of the entries over all 17 categories and have selected extremely worthy winners. Exemplifying just how difficult a choice it has been - there were too many exceptional entries - the judges felt the need to highly commend several other additional finalists.”