Rainer Wardenga and Torsten Sehl illustrate how amine-transaminases can be used in a novel two-step biocatalytic route for production of all four stereoisomers of nor(pseudo)ephedrine from inexpensive, achiral starting materials

The industrial implementation of biocatalysis for the production of pharmaceuticals and fine chemicals has grown substantially over recent years. An upcoming application is the chiral synthesis of optically pure amines using enzymes from the class of transaminases. The process option has been known for many years but it is now seeing renewed and wider interest in the industry because chiral amines are important building blocks and currently the market for active pharmaceutical ingredients (APIs) and agrochemicals accessible with this technology is very large.

It is estimated that today 75% of all pharmaceuticals contain a chiral amine component in their structure.1 Moreover, it is expected that the importance of the (R)-enantiomers will increase as they have been difficult to access until now with existing technologies. Furthermore, the targeted production of (R)-enantiomers with a transamination process is ecologically and economically more friendly because the asymmetric transamination will lead to a theoretically possible yield of 100%.

Enzymicals is an established provider for the biocatalytic transamination technology and has not only launched a unique commercial enzyme screening kit, but is also continually expanding its transaminase toolbox with strict (R)- and (S)-selective transaminases; the company has also developed immobilised formulations and novel processes.

Transaminases (E.C. 2.6.1.18) belong to the group of pyridoxal-5’-phosphate (PLP) dependent enzymes that catalyse the stereo-selective transamination of prochiral ketones. In the overall reaction, the amino group of a donor is transferred to an acceptor, which can be a carbonyl carbon atom of an α-keto acid, a ketone or an aldehyde. The product is an optically pure amine.

In co-operation with Forschungszentrum Jülich, Enzymicals and its network partner, Herbrand PharmaChemicals, have established a novel synthesis strategy using the company’s proprietary transaminase toolbox. The result is an industrially applicable two-step biocatalytic route for the synthesis of phenylpropanolamines. With this process all four stereoisomers of the API nor(pseudo)ephedrine (N(P)E) are easily accessible. These members of the amphetamine family, also known as ephedra alkaloids, are compounds with multifunctional applications (see Figure 1).

The stereoisomers of phenylpropanol-amines have direct applications as pharmaceutically active molecules. In the human body they have a sympatho-mimetic function and act as non-selective adrenergic receptor agonists and norephedrine re-uptake inhibitors. As pharmaceuticals, they have been used to induce mydriasis (dilation of pupils), to stabilise blood pressure, as nasal decongestants, appetite suppressants, and in cold/flu medication.2

In addition to their pharmacological interest, the four N(P)Es stereoisomers are valuable synthons, ligands and chiral auxiliaries in organic syntheses. Indeed, a SciFinder search revealed that N(P)Es have been used as reactants in more than 6,500 different reactions. For the four stereoisomers, SciFinder described some 395 different synthesis strategies with nor(pseudo)ephedrine (N(P)E) as final products.2 However, only a few of these strategies result in N(P)Es with good optical purities (ee, de >98%). Known chemical synthesis routes and chemo-enzymatic reaction cascades towards these products often require multiple steps or lack high stereo- and regioselectivities.

Enzymicals’ two-step reaction combines many advantages of known synthesis strategies, such as high stereo-selectivities, inexpensive starting materials and high step economy. The combination of an (R)-selective thiamine diphosphate (ThDP)-dependent carboligase with an (S)- or (R)-selective amine-transaminase resulted in the formation of (1R,2S)-NE or (1R,2R)-NPE in excellent optical purities (ee >99% and de >98%).

In the first step pyruvate is decarboxylated and subsequently ligated to benzaldehyde yielding (R)-phenylacetylcarbinol, which is obtained with high stereoselectivity (ee >98%). The second step of the cascade is catalysed by a stereo-selective transaminase for the reductive amination.3,4 It is possible to run the process in a batch setup with product concentrations of up to 60g/L, which meets perfectly the demands for industrial feasibility of pharmaceutical processes. 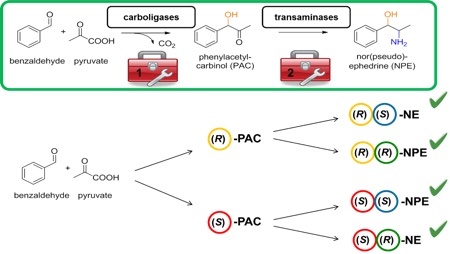 Figure 2: Two-step strategies for the synthesis of nor(pseudo)-ephedrines combining carboligases and transaminases (TA)5

Furthermore, it was demonstrated that this reaction could be carried out with lyophilised whole cells or crude cell extracts to lower the process costs. Latest developments also enable the covalent immobilisation of selected transaminases on different carriers and a reuse of the catalyst over several production cycles. Since a highly (S)-selective carboligase had not been available, novel enzyme variants were generated to access the intermediate (S)-phenylacetylcarbinol for the first time with optical purities >98% ee. As a result, (1S,2S)-NPE can be obtained now with an ee, de >98%.5

All in all it has been demonstrated that enzymes from different toolboxes can be efficiently combined, yielding all four stereoisomers of desired N(P)E. These valuable chemicals are now accessible in only two reaction steps from inexpensive, achiral starting materials (see Figure 2).

The Enzymicals network showed clearly its knowledge in transferring research results from enzyme development to production of synthetically challenging optical pure APIs under industrially relevant conditions. Currently the partners are working on transferring the technology into production and complete regulatory issues.