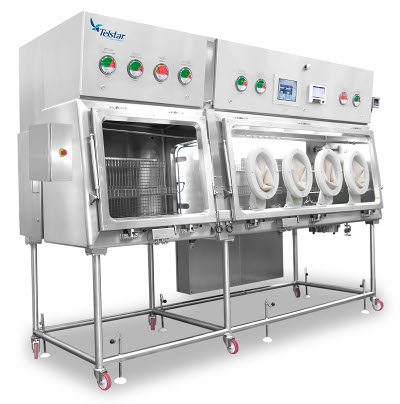 Telstar has developed five new modular isolators for sterility testing in the pharmaceutical and biopharmaceutical industry, which can be configured to the number of samples to be processed.

The isolators make it possible, for the first time, to validate sterile/aseptic production processes by selecting the size of the equipment according to the number of samples to be processed, considering production batch size, process time and space available. By incorporating an optional material air-lock, it is possible to operate the isolator in continuous mode, whereby samples are introduced as required.

The five models are:

The modular concept and standardisation ensure a testing process which is adaptable to the particular characteristics of each application, with the resulting benefits in cost and energy saving, while also maximising the effectiveness of the process.

Telstar says the difference in the initial investment between a Type 5 and a Type 1 unit can represent a saving of more than 30%, as well as saving in operating and maintenance costs.

According to Telstar, this is the only system in the decontamination market that does not require an isolator preconditioning stage, enabling a saving in process time and costs of as much as 10% per cycle compared with traditional H2O2 systems.

The Spanish firm has also developed all the accessories to enable the new range of sterility testing isolators to use any H2O2 decontamination system, either integrated or external to the isolator.