The nanozyme that uses light to kill bacteria

Scientists at the RMIT University in Australia have created a nanozyme with antimicrobial properties with huge potential applications. Angharad Baldwin interviews Professor Vipul Bansal, lead researcher, to find out more 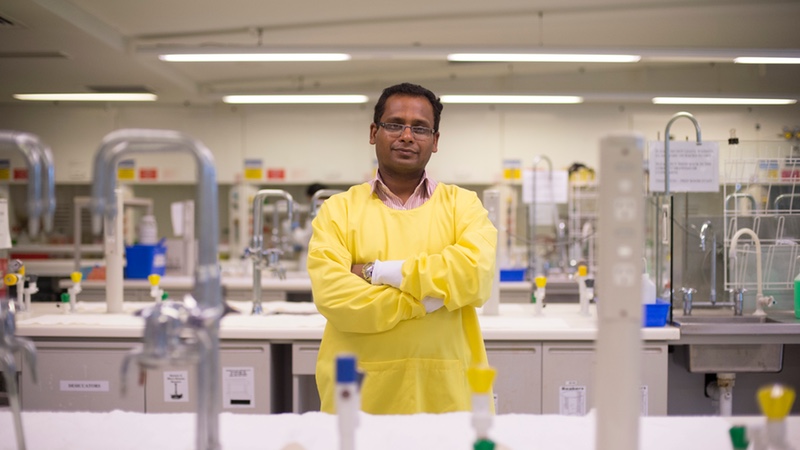 A new artificial enzyme has been made by researchers at RMIT, the Melbourne-based university. In a project that started more than five years ago, the researchers were originally trying to improve the performance of natural enzymes by modifying them using bimolecular engineering approaches. The group wanted to make the enzymes more robust so that they remained active for extended periods of time in the natural environment while facing temperature, humidity variations and environmental contaminants that would typically degrade the natural enzymes quickly.

"We continued to fail at improving the stability of natural enzymes, which led us to think out of the box, wondering whether we could instead embed natural enzyme-like activities in nanoparticles," explains Professor Vipul Bansal lead researcher on the project.

The researchers knew that certain nanoparticles can act as good catalysts for a number of chemical reactions and that natural enzymes are biological catalysts. Therefore, they asked the question: will nanoparticles show enzyme-like biological activity?

"We found that under certain conditions, we were able to force nanoparticles to act as biological enzymes without using any biological or organic components and therefore the 'Nanozyme' was born," says Bansal.

Different Nanozymes show different types of enzyme mimicking activities, ranging from peroxidase, oxidase, catalase and superoxide dismutase. Depending on the enzyme activity that a nanozyme mimics, the mode of action is different.

The antimicrobial nanozymes that the RMIT research group has developed show very high peroxidase-like activity. This activity is responsible for the production of hydroxy free radicals, which are damaging to bacteria. The most significant observation made was that this peroxidase activity could be remarkably enhanced just by shining white light on the nanozymes, thereby increasing their antibacterial activity. Natural enzymes generally fail to interact with external stimuli such as light to offer improved antimicrobial activity.

The artificial enzymes combine light with moisture to cause a biochemical reaction, producing hydroxy free radicals; these have the power to destroy bacteria by forming holes in their cells and efficiently killing them. 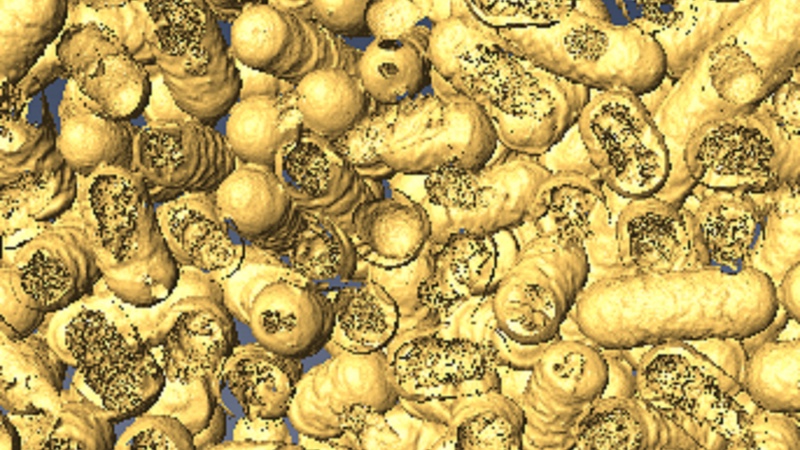 A 3D rendering shows dead bacteria and where it has been eaten by the nanozymes. Photo: Dr Chaitali Dekiwadia/ RMIT Microscopy and Microanalysis Facility

"The discovery of nanozymes has many potential applications," Bansal says. "Enzyme-like activity in nanoparticles can provide access to a range of inorganic materials that behave in a similar way to biological enzymes. The added advantage is that nanozymes are highly stable at pH and temperature extremes, and can be used, at least in theory, an infinite number of times. This means potentially all enzymatic processes can be replaced with NanoZymes."

The research has shed light on a wide range of possibilities for nanozymes in antibacterial applications. Bansal comments: "Could we use these materials in paints and coatings to develop self-cleaning and bacteria-free surfaces?”

“Certain nanozymes can capture harmful oxidative radicals; can we use nanozymes as reusable drugs to be lodged in a particular organ such as the lung and cause it to self-clean itself, preventing oxidative damage caused by smoke? The possibilities are immense and it is just the beginning for this new field."

Research like this offers a completely new way to control biological activity and there is huge scope for future applications. If the spread of infections in hospitals and public environments could be controlled using nanozymes, this could be a viable solution to the rising threat of antimicrobial resistance.

The nanozyme, however, has a drawback. While natural enzymatic reactions are highly selective for a particular substrate, nanozyme activity is broader and not so substrate dependant. For instance, while a glucose oxidase enzyme will digest glucose, it will not work on fructose or lactose. In comparison, a nanozyme that shows an oxidase-like activity, will not differentiate between glucose, fructose and lactose and will oxidise any sugars, perhaps even cholesterol.

“In certain cases, this broad activity can be disadvantageous, while in other cases, it could be very beneficial,” Bansal expains.

While the nanozyme currently uses visible light from torches or similar light sources, in the future they could be activated by sunlight. The researchers have shown that the nanozymes works in a lab environment. The team is now evaluating its long-term performance in consumer products. Currently, the group is in discussion with two companies who are interested in the technology for antimicrobial paints and coatings, and the researchers are very keen for this technology to be adopted across a number industries.

"I believe that we have now found ways to at least embed substrate specificity to some extent in nanozyme, but we will require more evidence and further research," Bansal concludes.

The research is published in the Journal ACS Applied Nano Materials.